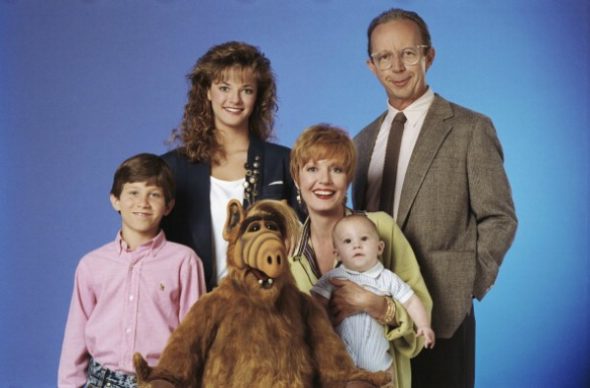 Is ALF returning to the small screen. Deadline reports Warner Bros. TV is in talks to reboot the NBC TV show.

The original ’80s sitcom “centers on a small, furry, arrogant extraterrestrial from the planet Melmac who’s taken in by an average American family.” The cast included Paul Fusco, Max Wright, Anne Schedeen, Andrea Elson, and Benji Gregory. The show ran on NBC for four seasons before ending in 1990.

Now, with so many other series reboots in the works, Warner Bros. TV is considering an ALF revival. No other details have been released, but Deadline reports the project is still in early stages and seeking a writer.

What do you think? Are you a fan of the original ALF? Would you watch a reboot?

Love Alf we would definitely watch a reboot !!!!

I love Alf! If they make this show i will watch it.

Kill me now. Is Hollywood truly that void of new ideas that they have to come up with reboots or is it that they are finally realizing the younger viewer isn’t watching TV and is trying to get the older view back?

Fowley
Reply to  Naomi B.

When Last man standing moved to its new station was then we hit end. All these remakes is making us look like total we need all these old outdated show to being us back to time we’re we felt safe and Secure. To me it’s a reminder of how low we are as a humans needing to relive past depressing and all.

Kwame
Reply to  Naomi B.

Transferring networks a show does it mean it’s popularity is going to continue. It just shows the networks are too lazy to create anything new specially with the last man standing example. Why do people wanna watch series that are canceled by a other networks? There’s a reason why and Roseanne was one of them. Roseanne has some other factors, but that show should never of been remade. Heck why don’t you just bring back Two and a Half Men and bring back Charlie Sheen. You’re probably bring back more viewers with Charlie sheen then the guy who replaced him… Read more »

LOVED that show. Hope they can get the original cast back together

I loved the Alf show. It would be great to reboot it.

NO!! How lame to reboot shows from long ago yet cancel the creative, innovative and educational new show, Timeless!!