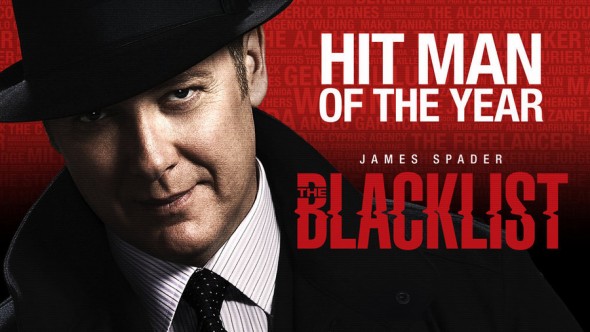 Tonight on NBC, The Blacklist returns after a long mid-season break. Today, the network announced that the top-rated drama will return for a third season as well.

The Blacklist revolves around one of the FBI’s most wanted fugitives (James Spader) who begins helping the authorities if a particular rookie agent (Megan Boone) is his partner. Now, the FBI works for him as he identifies a “blacklist” of politicians, mobsters, spies and international terrorists. The other castmembers in this drama include Harry Lennix, Diego Klattenhoff, Ryan Eggold, and Amir Arison.

The nine episodes of season two that have aired so far have averaged a 3.3 rating in the 18-49 demographic with 11.83 million viewers. Compared to the first season, that’s up by 15% in the demo and 10% in total viewership.

The recent post-Super Bowl episode drew an 8.4 in the demo and 25.72 million. The network gave The Blacklist that coveted post-game airing to help promote the show’s move to Thursday nights where it will be going head-to-head with Scandal on ABC. Time will tell if this move is a permanent one but The Blacklist will certainly return for the 2015-16 season.

What do you think? Are you glad to hear that The Blacklist has been renewed for a third season? Do you think it will stay on Thursday nights?

Yes, i am very glad that season 3 is coming, can’t wait for it. Ever since my brother and i saw the season 2 finale, we can’t stop thinking about what’s coming next. Didn’t watch such a good show for a long time.

Black list story line brings a refreshing change from the Ketchem Killem or Ketchem Fryem, same old same old. Not only the story line but the actors (all of em) bring a taste of reality to the screen.

I guess you can tell, I’m thrilled for season three. I wouldnt like to see the night change: (If it ain’t Broke).

Thanks for the space to sound off

I have hooked my friends and family on this show. I love it and was sick when I heard that NBC had canceled The Blacklist. Thank you for renewing another season!

So happy The Blacklist will return! My husband and I love the show. Thank you! Looking forward to the next season!!

This show is brilliantly written and artfully acted. I had to walk away from the TV several times during the season 2 finale because I didn’t want to see Elizabeth get nabbed! I can’t imagine she will ever go back to the FBI in the next season and I am excited to see what will become of her and all the other characters with this new direction.

Glad Blacklist is returning. I love the show.

My husband and I love this show!! I am so excited it has gotten renewed:)

Love this show can’t wait that long before season 444444 please hurry !! Blacklist is my favorite of all and I was big 24 guy this is my new show !

I love this show and I must add that I did NOT see the ending coming. I generally do with most movies & other TV shows so when they have an unexpected twist I LOVE IT !!!! Can’t wait for the fall opener. 🙂

I and my entire family are glad it has been renew

Pretty much done with this show. NBC: Cancel anytime at your pleasure.

I live for this show! I can’t wait that looooong! please let keen and ressler end up together!