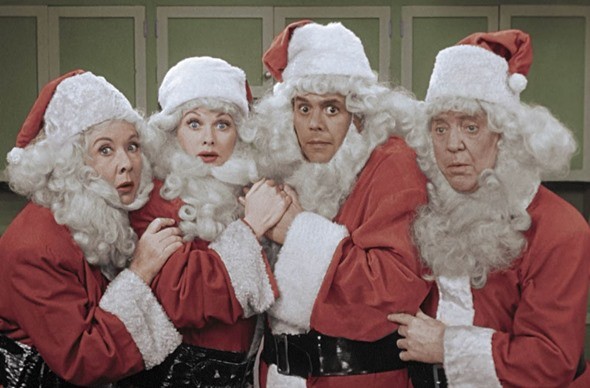 Ready to ring in the holidays with Lucy and Dick? Today, CBS announced they will debut newly colorized episodes of I Love Lucy and The Dick Van Dyke Show this December.

The holiday special includes the “Where Did I Come From” and “Never Bathe on Saturday” episodes of The Dick Van Dyke Show as well as the “Pioneer Women” and “The Christmas Episode” episodes of I Love Lucy.

The Featured Episodes, “Where Did I Come From” and “Never Bathe on Saturday,” Were Chosen by Creator Carl Reiner to Showcase his Favorite Episodes Featuring Dick Van Dyke

“After seeing only two seconds of 92-year-old Dick dancing in the new ‘Mary Poppins’ movie, I picked shows that featured Dick’s physical comedy,” said Reiner. “He was, is and will always be the greatest entertainer I have ever seen.”

The special features the season one episode “Where Did I Come From,” written by Carl Reiner, and the season four episode “Never Bathe on Saturday,” also written by Reiner. The main titles and end credits of the two episodes are seamlessly combined into one set – at the beginning and end of the hour – with no interruption between the episodes.

In “Where Did I Come From,” 6-year-old Ritchie asks his parents the inevitable “where did I come from?” question, and they recall the days before his birth. The episode was first presented on Jan. 3, 1961 during the series’ first season.

In “Never Bathe on Saturday,” the Petries’ romantic second honeymoon becomes a disaster when Laura’s toe gets caught in a bath spout. The episode was first presented on March 31, 1965, during season four.

“The Dick Van Dyke Show” originally aired on CBS from Oct. 3, 1961, through June 1, 1966, finishing in the Nielsen top 10 in three of its five seasons, peaking at #3 during the 1963-1964 season. The show received 15 Primetime Emmy Awards, including three Emmys for Dick Van Dyke, five for Carl Reiner and two for Mary Tyler Moore.

Carl Reiner is an executive producer, with George Shapiro and Paul Brownstein. “The Dick Van Dyke Show” is distributed by Paul Brownstein Productions.

I LOVE LUCY CHRISTMAS SPECIAL,” A NEW ONE-HOUR SPECIAL FEATURING TWO EPISODES OF THE CLASSIC SERIES, TO BE BROADCAST FRIDAY, DEC. 14 ON CBS

I LOVE LUCY CHRISTMAS SPECIAL features “The Christmas Episode” and the newly colorized “Pioneer Women.” Both were colorized with a nod to the 1950s period in which they were filmed. The main titles and end credits are seamlessly combined into one set at the beginning and end of the hour, with no interruption between the episodes.

“The Christmas Episode” finds the Ricardos and Mertzes decorating Lucy and Ricky’s Christmas tree and reminiscing about how their lives have changed since the arrival of the Ricardos’ son, Little Ricky (Keith Thibodeaux). Flashbacks recall the night Lucy tells Ricky she is pregnant, the time Lucy shows up unexpectedly as part of a barbershop quartet, and the day Ricky and the Mertzes rehearse taking Lucy to the maternity ward.

In “Pioneer Women,” Lucy and Ethel’s hopes of joining the posh Society Matrons’ League leads to a bet with their husbands over which sex – the men or the women – had it harder living in a bygone era. They select the turn of the last century, and as Lucy and Ethel start to bake their own bread and churn their own butter, the men become acquainted with straight-blade shaving and riding home from work on horseback. They all have some “‘splainin'” to do when two ladies from the Society Matrons’ League stop by for an unexpected visit.

“Pioneer Women” was originally broadcast on March 31, 1952, and became an immediate viewer favorite.

“I Love Lucy” Christmas specials have aired on the Network the past five years, each combining the holiday-themed episode with a different comedy classic. Beginning in 2015, “The Christmas Episode” has been shown colorized in its entirety, with fully-colorized flashback scenes that had previously been presented in black-and-white.

“I Love Lucy” was broadcast on the Network from Oct. 15, 1951 through June 23, 1957. It was voted “The Best TV Show of All Time” in a 2012 viewer poll conducted by People magazine and ABC News. “I Love Lucy” stars Lucille Ball and Desi Arnaz as Lucy and Ricky Ricardo and Vivian Vance and William Frawley as the Ricardos’ friends and landlords, Ethel and Fred Mertz.”

What do you think? Are you a fan of I Love Lucy and The Dick Van Dyke Show? Will you watch the CBS holiday special?

I will ALWAYS watch I Love Lucy! Yay

If you want to walk around and see the inside of the homes from The Dick Van Dyke Show and I Love Lucy, just as they are on TV, but in color and including the 4th wall, so it feels like a real home, check out this website. I did 3D renderings of the homes, showing views not possible on the show, did a video walk-through tour and then remodeled them. If you click on “Detailed Blog Post” you’ll get to see even more images of the home. Enjoy! https://www.mockingbirdlane.design/

After they skipped out on the spring superstar special in May, I was wondering if they were abandoning this altogether (which would be stupid) or just taking a breather. I’m glad it’s the latter.

It’s a shame that the episodes of these shows in this annual series can’t be aired by CBS in their entirety instead of being edited by three or four minutes each. I haven’t bought the colorized DVDs but the DICK VAN DYKE SHOW episodes are uncut there. It’s really not surprising, I guess, that in these days when their number one comedy, THE BIG BANG THEORY, comes in at under twenty minutes an episode, that these two shows, which ran 25-26 minutes per, classics though they are, wouldn’t be cut any slack.

I will definitely watch. I saw the pioneer women episode as a little kid when it first aired and I still remember it; it was that funny. I’m looking forward to my daughter getting to see it. There’s a good reason that these shows are still re-running onTV. Despite their age, they are still wonderfully funny!

I will certainly watch them. They are the BEST…….:)