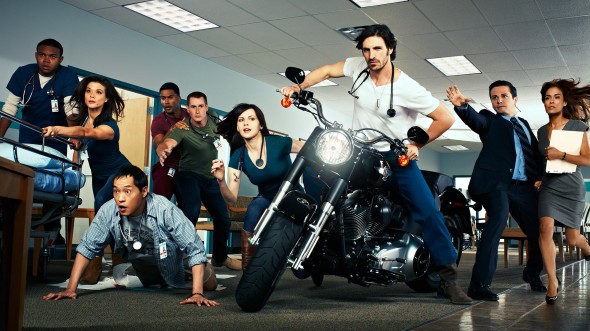 TV show description:
This medical drama takes place at the underfunded San Antonio Memorial Hospital and follows the men and women who work the night shift — where the toughest and craziest cases always seem to come through the door. The staffmembers are an irreverent and special breed.

Adrenaline junkie TC Callahan (Eoin Macken) served three grueling tours of duty in Afghanistan. An Army doctor who uses unorthodox methods to save lives, Callahan’s brash style does not always sit well with the bosses. He is however a brilliant surgeon and a fearless advocate for his patients.

His best friend is Topher (Ken Leung), a quick-witted free spirit who knows how to manipulate the system in his favor. He will do whatever it takes to save a patient’s life.

TC’s protégé is Drew (Brendan Fehr), a former Army medic turned doctor who knows how to let off steam with a casual prank. When lives are at stake however, he’s all business. He’s proud to be part of the often-ridiculed night shift and engages in mixed martial arts as a way to reduce stress that comes with the job.

The new night shift boss is TC’s ex-girlfriend, Doctor Jordan Alexander (Jill Flint). A brilliant physician, she’s recently been promoted with a mandate to bring order to the emergency room. She struggles to keep everyone in check, but TC doesn’t make it easy.

Paul Cummings (Robert Bailey Jr.) is fresh out of medical school and still adjusting to the rigors of an emergency room as a surgical resident. Krista (Jeananne Goossen) is also a new intern. She’s smart and beautiful and as comfortable with her sensuality as she is with a scalpel.

Kenny (JR Lemon) is a seasoned nurse who keeps the doctors focused on the tasks at hand. He works hard to ensure that patients get the care they need, even if it means he has to break a few rules.

Landry de la Cruz (Daniella Alonso) is a fun-loving Texan and the lone psychiatrist on the night shift. She finds she has to tend to her colleagues as much as she cares for the patients on the ward.

Making their lives even tougher is the fact that the night shift is now under new senior management. Michael Ragosa (Freddy Rodriguez) is an unflinching bureaucrat determined to cut costs but he’s also hiding a health secret that has kept him from becoming a doctor. He often releases his frustrations on his staff, refusing to let anyone see him as weak and ineffectual.

What do you think? Do you like The Night Shift TV series? Do you think it should have been cancelled or renewed for a fifth season?

Please save Night Shift. The stars are very talented.

Are you kidding me?? I am devastated to hear that The Night Shift is cancelled This is my favorite show. It is the only show that I am sad when the season ends and I wait in anticipation for the next season to come out.

I was very sad when I heard this show was cancelled. It was a great show! Don’t know why it can’t continue with the 13 episodes every summer!

Oh, no! I just realized that Night Shift was cancelled! Please bring it back! This is one of my favorite shows. Surely, there is more story lines that can accommodate another season or two. PLEASE!, PLEASE!

What a great show! The show has a excellent medical
team

I love this show!!! Please do not cancel it.

I came to the show in the last year probably and I really really loved it. It was just
irreverent enough to not get sappy. I am an old, 76, lady and I still like the good ones. And it showed every promise of becoming a great show. Maybe there will be enough good comments and writing in to bring it back. Hope so.

What a great show Don’t cancel

Another POOR choice for the network to cancel so disappointed. Why? When will networks listen to the viewers.