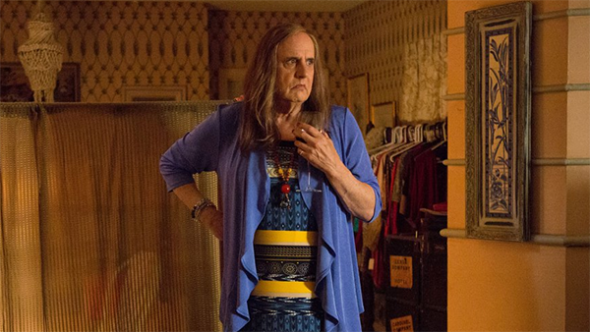 Transparent‘s season two premieres December 11, 2015 on Amazon Prime Video in US, UK, Germany, and Austria. The Transparent cast includes Jeffrey Tambor, Gaby Hoffman, Amy Landecker, and Jay Duplass. Scroll down for all the season two details, and watch the trailer.

Season two of Transparent begins with a big, white wedding for Sarah and Tammy–but is it happily ever after? Post nuptials, Sarah gets in touch with her deeper desires, which isn’t always comfortable. Now out of the closet, Maura discovers the hardest part of her transition is still ahead, and faces some tough personal decisions about her future. Josh and Rabbi Raquel navigate their new relationship, and the complexity of being an instant family for Josh’s recently returned son, Colton. Ali zeroes in on her future, captivated by a new connection with Syd and a prolific feminist mentor.

Continuing their journey towards their authenticity, the entire Pfefferman family returns for the second season of Transparent. Golden Globe and Emmy Award-winner Jeffrey Tambor (Arrested Development) stars as Maura, Judith Light (The Exes) as Shelly, Amy Landecker (Louie) as Sarah, Jay Duplass (Togetherness) as Josh and Emmy nominated Gaby Hoffmann (Girls) as Ali. The second season of Transparent is executive produced by Jill Soloway (Six Feet Under) and Andrea Sperling (Like Crazy).

“Season two is wild! Now that the bubble wrap is off, it’s time for the whole family to transition,” said Soloway, the Emmy Award-winning creator of Transparent. “Our Pfeffermans realize they must give up their disguises, unspoken arrangements and secrets. By exploring their shared history and legacy, they come to understand that you can’t go forward without knowing where you come from. Ultimately, everyone will open their hearts, advertise their desires, and test those notoriously wobbly boundaries as each Pfefferman tries their hardest to come out – as themselves.”

Transparent is a half hour novelistic series that explores family, identity, sex, and love. The first season followed Maura Pfferman’s journey to being her true self. When she reintroduced herself to her family, everyone else’s secrets finally came out. This included her ex-wife Shelly, and their adult children–meandering Ali, record producer Josh, and sexually conflicted Sarah. Each family member spun into different directions as they figured out who they aren’t. The series has been renewed for a third season which is scheduled to air in 2016.

Prime members can look forward to new original series premiering this year such as the much anticipated adaptation of Philip K. Dick’s The Man in the High Castle premiering on November 20 along with Mozart in the Jungle premiering later this year. Coming in 2016 will be the second seasons of Bosch and romantic comedy Catastrophe, along with the debut season of The New Yorker Presents and Mad Dogs.

Amazon Video can be accessed through the Amazon Video app on TVs, connected devices and mobile devices, or online at Amazon.com/amazonvideo. Prime Video titles can also be downloaded for offline enjoyment–the only subscription streaming service to offer this functionality. Customers who are not already Prime members can sign up for a free trial at Amazon.com/prime.

What do you think? Are you a fan of Amazon’s streaming TV series, Transparent? Do you plan to watch the second season?