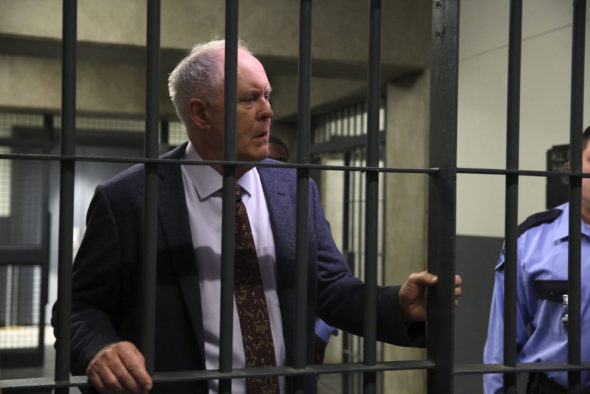 The verdict is finally in. NBC has renewed its Trial & Error TV show for a second season of 10 episodes. Writers Jeff Astrof and Matt Miller executive produce the comedy along with director Jeffrey Blitz. Expect Trial & Error, season two, to premiere mid-season.

Trial & Error creators Astrof and Miller said, back in January, that they are approaching the crime spoof as an anthology series. This makes sense, as Larry’s trial is over. According to Deadline, everyone from the season one cast is returning, except for Lithgow.

Last week, NBC Chair Bob Greenblatt said he was hoping to have good news about the Warner Bros. sitcom.

Trial & Error: A Look at the Ratings

The first season of Trial & Error  averaged a 0.92 rating in the 18-49 demographic and 3.86 million viewers. When you compare its ratings to those of other NBC TV shows, the renewal is a bit of a surprise, but the Peacock Network must have faith in it.

The Trial & Error Twitter page announced the second season renewal. Check it out.

We're heading back to East Peck for Season 2. #TrialAndError pic.twitter.com/hOxXs8c0Jh

What do you think? Did you watch the first season of Trial & Error? Did the NBC season two renewal surprise you? Let us know, below.

Quirky, funny, refreshing and so happy it will be coming back. You’ve got a winner here!

I loved this show. I hope they find someone to replace Lithgow. A little more edge would be good, think Psych or even Twin Peaks!

Stupid show… but I laughed at the inept characters anyway. One season is enough ! Your insulting our intelligence. Trial is over John is gone now it’s a yawn. It’s time to go and end the show…

Loved this show and am very exited to hear it’s returning for a second season! So funny! Loved all the characters and am hoping all the best for season two.

I think its awesome that the show is coming back for a second season but without John Lithgow (Larry Henderson), I am concerned about it being a disappointment. Don’t get me wrong, the other cast members are great, but every one of them is what made the show so funny and so great. I just think Season 2 will be missing something.

I loved this show…so happy for the renewal…would love to see Lithgow back…maybe even as Josh’s assistant or even Dwayne Reed’s assistant. Dwayne needs all the help he can get.

YES!! Love this show….I burst out laughing every episode – which is so rare nowadays with comedies

Renewed for 10 eps only. And no Lithgow. I’ll tune in to see how they handle that.

I’m so happy Trial & Error is returning for a 2nd season! It’s the most original comedy to come along in years. Plus, it’s hysterically funny!

Yey! Love the show. Kooky and silly and had me laughing out loud!

LOVED the show. It & The Good Place are my 2 fave comedies from this season. So glad it was renewed.

Renew and Error in my opinion. Stupid writing.

I was delighted with Trial and Error and am so happy they are bringing it back. I laughed and laughed while I was watching the series. Thanks NBC!

I am so glad it’s being renewed, I ABSOLUTELY love the first season, very funny and we’ll scripted, great show!!

It doesn’t surprise me at all …this show is much like The Office. There is nothing like it right now on tv and if you haven’t seen it you should. Watch it once and you will be hooked like I was. I am very particular about comedy also.
It is intelligently written, extremely witty and not your typical boring sitcom.
I think NBC made the right choice and will probably have another iconic show in it.