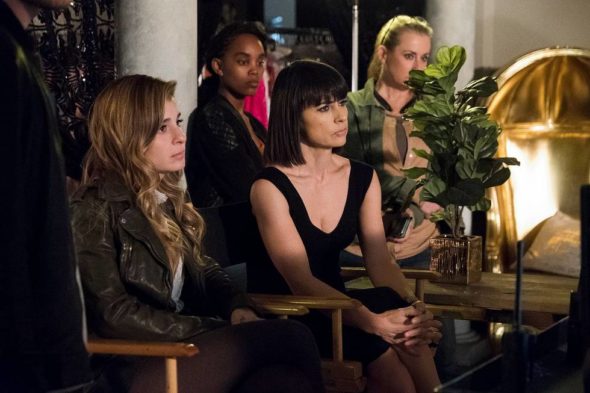 In May, it was announced that Hulu would stream the UnREAL series’ fourth season, ahead of potential airings on Lifetime. Today, without any advance notice, Hulu released all eight episodes and confirmed that this is, as suspected, the dramedy’s final season. The streaming service also offers the first three seasons of UnREAL, for those who want to catch up.

It’s unclear if or when Lifetime will ultimately air the last season of UnREAL on cable. The third season, which just finished airing in April, garnered a 0.09 rating in the 18-49 demographic with 270,000 viewers. Compared to season two, that was down by 56% and 47%, respectively.

IT’S OFFICIAL: UnREAL MOVES TO HULU FOR ITS FINAL SEASON
Fourth and Final Season of the Peabody Award-winning Drama Debuts Today as a Hulu Original Series

SANTA MONICA, CA [July 16, 2018] Everlasting has moved its set to Hulu. In a new deal between Hulu and A+E Studios, the fourth and final season of fan favorite drama series, UnREAL, is now available to stream in its entirety on Hulu. The final installment joins Hulu’s award-winning originals slate and brings together the complete UnREAL library, all on Hulu.

Starting today, fans of UnREAL can immediately dive into the new season. The deal also brings the complete series together on Hulu, making it possible to discover, watch and re-watch all of the steamiest moments, most memorable elimination ceremonies and killer cliffhangers from throughout the show’s four seasons.

Season four of UnREAL follows Rachel (Shiri Appleby) and Quinn (Constance Zimmer) as they return to the set of Everlasting for an “All-Stars” themed season. With former contestants, and a new format, this season is poised to be even more dramatic than ever. Co-creator Sarah Gertrude Shapiro and showrunner Stacy Rukeyser both return for Season 4. New cast members include François Arnaud, Natalie Hall, Meagan Holder and Alejandro Muñoz. Constance Zimmer returns as director for one episode, and Shiri Appleby directs two episodes, including the series finale.

Since its premiere on Hulu, UnREAL has consistently drawn in viewers who could not wait to watch the show. On average, viewers of the series are bingeing 3-4 episodes in one session, and complete full seasons in a matter days.

“UnREAL has captivated audiences on Hulu since season one, so when this opportunity came to us, we knew we couldn’t miss out,” said Craig Erwich, Senior Vice President of Content, Hulu. “This is a unique way to both satisfy fans of the show, while also continuing to introduce it to new audiences.”

“We love season four of UnREAL and its visionary creativity in bringing back many favorite characters for an all-star competition. When the opportunity to partner with Hulu arose, we immediately saw the huge benefit to UnREAL’s loyal fans, as well as a unique way of recruiting first-time viewers to this ground-breaking series,” said A+E Studios’ Barry Jossen. “UnREAL has been an incredible ride filled with awards, critical recognition, committed fans and, best of all, insightful cultural dialogue throughout its run. We expect season four to deliver another great round of cultural influence with its timely themes.”

Hulu is a leading premium streaming service that offers instant access to live and on demand channels, original series and films, and a premium library of TV and movies to more than 20 million subscribers in the U.S. Since its launch in 2008, Hulu has consistently been at the forefront of entertainment and technology. Hulu is the only streaming service that offers both ad-supported and commercial-free current season shows from the largest U.S. broadcast networks; libraries of hit TV series and films; and acclaimed Hulu Originals including Emmy® and Golden Globe Award-winning series The Handmaid’s Tale, The Looming Tower, Future Man, Marvel’s Runaways, The Path, 11.22.63, and Golden Globe nominated comedy Casual, as well as upcoming series Castle Rock, The First, Catch-22 and Little Fires Everywhere. In 2017, Hulu added live news, entertainment and sports from 21st Century Fox, The Walt Disney Company, NBCUniversal, CBS Corporation, The CW, Turner Networks, A+E Networks and Scripps Networks Interactive to its offerings – making it the only TV service that brings together live, on-demand, originals, and library content all in one place, across living room and mobile devices.

ABOUT A+E STUDIOS
A+E Studios is the studio unit of the award-winning global media company A+E Networks, LLC. A+E Studios creates, produces and distributes high-quality scripted programming across all networks and platforms in the A+E Networks portfolio, including Lifetime®, HISTORY®, Lifetime Movie®, and A&E IndieFilms®, as well as outside buyers. A+E Studios’ slate of programming consists of scripted series, event series and movies, including the Peabody Award-winning UnREAL; the event mini-series ROOTS, the action drama SIX, the breakout series Knightfall, and the forthcoming series Project Blue Book for HISTORY; and YOU from Greg Berlanti, premiering on September 9, as well as and the upcoming Jenji Kohan-produced series American Princess for Lifetime, among others. Following its first full production year, A+E Studios received 16 Primetime Emmy® nominations including Outstanding Limited Series for ROOTS.

My heart is broken !!! I am absolutely obsessed with this show. I wish they would consider a season 5 !!

So agree Hulu what are you thinking?? We love unreal

no season five¿,
this is real BUMMER,
i like this series very much!