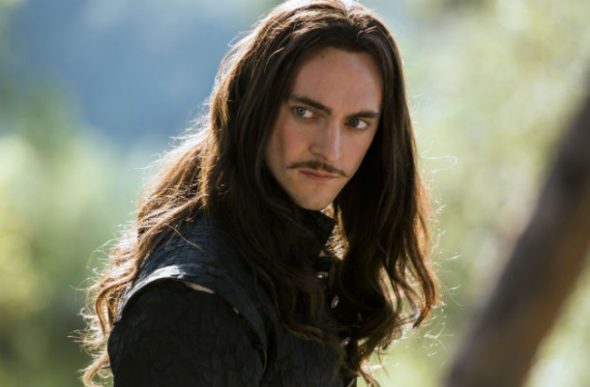 The sun is setting on Versailles. Recently, Variety reported season three will be the last for the Canal+ and Ovation TV show.

In an interview with Variety, Canal+ executive Fabrice de la Patelliere revealed why season three will be the end for Versailles:

From the start, “Versailles’” producer Claude Chelli had spoken to us about making three seasons. The series was meant to chronicle the coming of age and rise to power of Louis XIV and show how he built Versailles to corral his nobles, asserting his absolute power. At the end of the third season, Louis XIV has achieved absolute power, he’s 46 or 47 years old, so we reached the end of the narrative arc that we had envisioned for this series.”

Season three of Versailles is set to premiere in the U.S. on Ovation this fall. You can read more details below:

NATPE: January 16, 2017 Fresh off the success of its Season Two premiere, Ovation, America’s only arts network, has licensed Season 3 of the hit international series Versailles (10 x 60′) from Banijay Rights, the international distribution arm of Banijay Group. The new season will have its U.S. linear and digital premieres on Ovation TV, on VOD, and Ovation NOW in the fall 2018. The announcement was made today by Scott Woodward, EVP, Programming, Ovation.

Versailles season 3 is a CANAL+ Création Originale series, produced by Capa Drama, Banijay Studios France, Entre Chien et Loup. This landmark Anglo-French drama takes the period genre to new dimensions, focusing on the art and culture, greed and deception, sex and politics, and duplicity and murder that all collided in the court of Louis XIV. Since its debut on Ovation in the fall of 2016, the series has been a remarkable success for the network, both on air and across its social networks. Season Two, which concluded last month, exceeded the stellar ratings of Season One by +11% with adults 25-54, and +13% in total viewers. On social media, fan engagement continued to grow throughout the season, and doubled during the final episode. The Los Angeles Times named Versailles Season Two one of the Top Ten shows of 2017.

“Versailles has been a stunning success for Ovation since the Season One premiere,” said Woodward. “Season Two exceeded our expectations, surging past the network’s benchmarks for original premieres. Particularly thrilling for us was the marked uptick across all our social media platforms and interest in our original behind-the-scenes and documentary content about Versailles. It had the ‘tide raises all ships’ effect and we certainly are eager to ride the wave into 2018 with Season Three.”

At the end of the last season, we saw King Louis’ empire, as well as his sanity, dissolve into chaos. In Season Three, he resolves to regain control of his own life, his precious Versailles, and France itself. But rebellion is in the air and new challenges are brewing inside Versailles, as well as outside. Emboldened by his new favorite Madame de Maintenon, he won’t relent in his quest for absolute power, convinced of his own divine powers.

What do you think? Have you seen Versailles? Are you sad the show is ending?

Please reconsider Season 4. I was absolutely mesmerized. Now I am sad it’s over. It was GORGEOUS!

Please reconsider season 4. This series is truly remarkable from the writing, casting, acting, set and costume design… it is simply magnificent! Please note my extreme sadness if Season 3 is the last season.

so sorry to hear this…show was great….acting superb….. do wish it would come back….

Could the writers at least have wrapped up the series with a “Where is he now?” ending?? For instance, “Phillippe and Chevalier left Versailles and are living happily in the Colonies.” Or, “Madame de Maintenon was beheaded because she was just so annoying!” (Obviously I didn’t like her.) But it was very inconsiderate to end this series that its fans have supported over three seasons without at least wrapping up the lives of the characters we have grown to love (and hate).

Please bring Versailles back for a final 4th season!