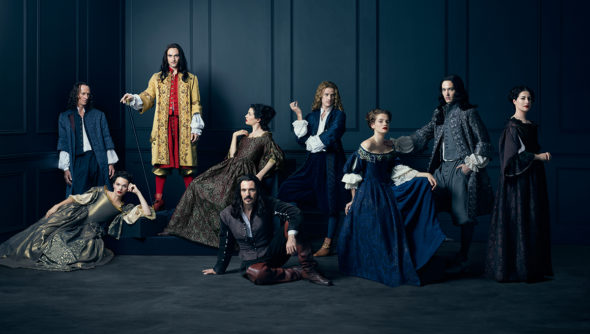 TV show description:
Set in France during the reign of Louis XIV (Blagden), the Versailles TV show features the “Sun King” building his palace, amidst all the intrigue of French Court. In 1667, the French air is suffused with power, sex, love, betrayal, and as ever — war.

At the age of 28 years, Louis is on the brink of greatness. Merciless and driven, he knows no bounds when it comes to reaching his goals. In his quest to rule France with an iron fist, Louis is obsessed with crafting the grandest palace in all of Europe.

For all its glory, Versailles is his court’s gilded cage, where Louis keeps a close watch on friends and enemies alike. There, the nobles drink, gamble, and even plot murder in their efforts to gain the King’s favor.

Series Finale:
Episode #30 — The Legacy
Having crushed the Protestants and thwarted Cardinal Leto, Louis (George Blagden) feels invincible. But his family and France are divided and Fabien (Tygh Runyan) is on the loose. And what of the future? What will be his legacy? In an effort to appease the people, Louis decides to go to Paris to give his blessing to the sick, unaware that Jeanne (Jenny Platt) and the rebels are planning to assassinate him.
First aired: December 8, 2018.

What do you think? Do you like the Versailles TV series? Should this TV show have been renewed for a fourth season on Ovation?

This show should have been renewed over and over again! that’s how good it was! What a loss! I think I’m not alone!

I enjoy this show. I am not a big TV watcher so it’s taken me nearly 3 years to watch this. I have the last episode left to watch.

I look forward to this show… it is one of the best please, if you are going to end it… end it right! This is sooo often rarely done and the show is amazing!!!

I just discovered this gem. Everything about it is wonderful.

Saddened! Just found out that my beloved series, Versailles was possibly canceled and I’m heartbroken!

This is breaking my heart as well!!

I was interested in the show, and have seen most of season 1, I think. or Maybe more: I saw Madame Maintenont become Louis’s rather than Montespan, Marquise, if I am correct. But it was hard to catch an installment, and I thought it would continue afterward.(There is room to go, with politicsl other states, and so on, historically speaking. One question or remark: I was pretty certain that there was some cutlery for nobles. I know some even carried a couple of pieces tucked into their boots when travelling, like a fork of a knife. Just mention this because… Read more »