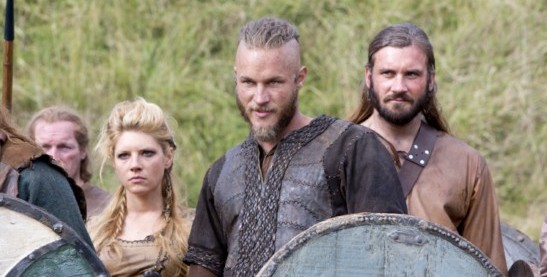 History has announced that they’ve renewed their original scripted series, Vikings, for a second season of 10 episodes.

Five episodes of the current season have aired so far and the first airings average a 1.5 rating in the 18-49 demographic with 4.74 million total viewers. There are four episodes of Vikings left in this season and the finale will air on April 28th.

New York, New York, April 5, 2013 – HISTORY has picked up VIKINGS, its first scripted drama series for a 10-episode second season, it was announced today by Dirk Hoogstra, EVP, Development and Programming for HISTORY. Created and written by Michael Hirst, the renewal comes just five episodes into the VIKINGS freshman season. Four new episodes remain in the current season airing Sundays at 10 p.m. with the season finale slated for Sunday, April 28 at 10 p.m.

“Vikings is a win win for us. As our first scripted series, VIKINGS has paid off in a big way with critical acclaim, strong ratings and a passionate, loyal fan base. It came out of the gate strong and has stayed on top, solidifying HISTORY as a major player in the scripted genre, just as we are in reality,” said Hoogstra. “We could not be more proud of the entire cast and crew and everyone involved in the making of VIKINGS. Michael Hirst has captured audiences with his complex, compelling characters and brought the unknown, epic world of these warriors to life. Season Two will begin production this summer to air in 2014.”

MGM Television brought the series to the network and brings VIKINGS to the global audience, serving as the international distributor outside of Ireland, Canada and the U.S.

“We are very excited that VIKINGS is generating so much attention worldwide,” said Roma Khanna, President, Television Group and Digital, MGM. “MGM is thrilled to have the continued support and enthusiasm of our partners at HISTORY and to work with an amazing international team as they bring Michael Hirst’s vision to audiences around the globe.”

VIKINGS, airing Sundays at 10 p.m. ET, tells the extraordinary tales of the lives and epic adventures of these warriors. The drama portrays the world of these Dark Age raiders, traders, explorers – not from an outsider’s view, but, through the eyes of Viking society.

While VIKINGS is filled with conflict, warfare and bloodshed – for these were extreme times – it is a family saga at heart. It follows the adventures of Ragnar Lothbrok (Travis Fimmel, The Beast, Baytown Outlaws), a curious, compelling man who is always looking to break through barriers and discover new worlds to conquer. Ragnar is deeply frustrated by the unadventurous policies of his local chieftain, Earl Haraldson (Gabriel Byrne, In Treatment, Usual Suspects, Millers Crossing), who continues to send his Vikings raiders east every summer, to the Baltic states and Russia, whose populations are as materially poor as themselves.

VIKINGS is an international Irish/Canadian co-production being co-produced by World 2000 and Take 5 Productions. HISTORY will broadcast domestically in the U.S. MGM Television will bring VIKINGS to the global audience, serving as the international distributor outside of Ireland, Canada and the U.S. VIKINGS is produced in association with Shaw Media, and the series will air on HISTORY in Canada.

HISTORY(R) is the leading destination for factual entertainment, including award-winning original series and specials that connect viewers with history in an informative, immersive and entertaining manner across multiple platforms. The network’s all-original programming slate, including scripted event programming, features a roster of hits including American Pickers(R), American Restoration(TM), Ax Men(TM), Ice Road Truckers(R), Pawn Stars(R), Swamp People(R) and Top Shot(R) as well as epic mini-series and specials such as the Emmy(R) Award-winning Hatfields & McCoys, Gettysburg, Vietnam in HD, America The Story of Us, and 102 Minutes That Changed America. The HISTORY website is the leading online resource for all things history, and in 2011, the United States Library of Congress selected HISTORY’s Civil War 150 site for inclusion in the historic collection of Internet materials related to the American Civil War sesquicentennial. www.history.com

What do you think? Do you like the Vikings TV series? Are you glad to hear that it’s coming back?

Enjoy the series very much, hope it keeps going, the Vikings were a proud people

Love this series! Will be so sad when it is done.

Love the series. A lot of history

The Vikings mini series is the best show on television, bar none! They don’t get any better than this.

Glad to here it is coming back! It was a great first season, and can’t wait for the 2nd season.

WHAT!!!! —NEVER……This program is EXCELLENT.
This is one of the best programs on television that’s worth the time to watch…..
Leave it ON!!!!!

I love the VIKINGS, please do not cancel it. I have been checking my listing waiting for it to return. Do not cancel one of the best shows on tv and it happens to be on the HISTORY channel (how about that).

I love Vikings….keep it going please. All my friends and family are watching it too….can’t decide which is my favorite…Game of Thrones or Vikings….both are superb.

It would be a crime to stop this series. As I am continuing my own research in my genealogy of Danish-Swedish ancestor they have really done their home work ….completely PLEASE!!!

I love this show. I am so liking it, I am researching the history @ my library and on-line.

Keep this on History Channel!

Please!! Do not even reconsider not making a Season 2, 3, 4 and 5! This is by far one of the best series ever! It is bright jewel compared to the drudgery and clunkers that the rest of cable offers.

I can’t wait to see more of this show. I thought no one was making decent tv shows these days, so glad to be wrong this show is excellent. Keep up the good work and I hope the quality of your work rubs off onto other show producers.