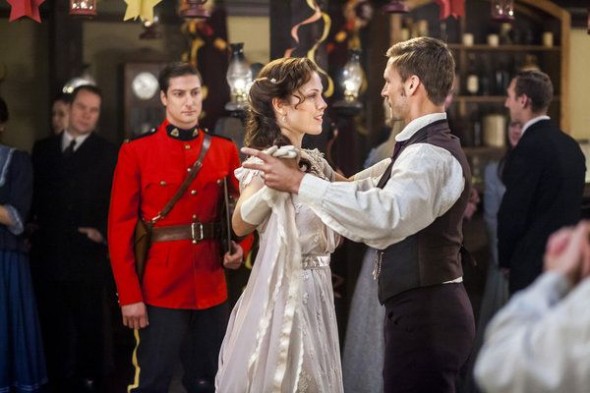 In January, Hallmark Channel announced that season two of When Calls the Heart would premiere on Saturday, April 4th, at 9pm. The cable channel has now announced that the season will kick off three weeks later, on April 25th.

What do you think? Will you be watching the special two-hour return of When Calls the Heart on Hallmark?

Very good program a must keep it on

It’s frustrating to get hooked on a great show and not be able to watch the 2nd session on xfininity makes me feel like a second class TV watcher. So few programs worth my time spent watching. I do not want to watch it on Netflix and sit crammed in front of my computer. It’s not as relaxing as sitting on the couch with popcorn. Hallmark let us down. I thought they proud ed themselves in being family fare. It’s one of our favorite channels, but becoming less so.

Why can’t you get the DVD of it from Netflix? Its on there list. I think Hallmark does the best they can with their funding. Its on DVD, its on Netflix, its on Hallmark.com, its on Amazon, , there are lots of options. Xfinity may not have wanted it on there anymore-may not have been Hallmark’s fault. Can’t always blame the network. They do a pretty job with bringing some quality TV to us. I’m not going to complain about Hallmark…there are many options to watch it out there..just gotta look. I don’t think you can’t blame Hallmark ..not their… Read more »

It’s not on Netflix. We have been waiting and waiting but still season 2 is not there!!! What is the hold up on that, Netflix?

The second season isn’t on Netflix either

This is a wonderful show that gives a wholesome glimpse of life in another time. Family programs are what make Hallmark great. Please keep the show on. I look forward to seeing every uplifting episode!

People are illegally putting it on Youtube. Hallmark doesn’t do that. But, they have been nice enough to leave it where people downloaded illegally.

Dear Hallmark Channel,
Please continue your series When Calls the Heart. I love that my family and I can sit down together and watch a clean program. There are so few shows that appeal to both kids and adults. PLEASE keep this going!

please bring back When Calls the Heart!! Best show on TV!

Why such a short season? Love the series, we need more episodes of “When Calls The Heart” in a season or bring it on twice a year. Hallmark I am so glad that you are giving us good entertainment and series that are family friendly. I got attached to “When Calls The Heart”, Cabot Cove and Signed, sealed, Delivered please don’t cancel them until the word gets out. A lot of people aren’t aware of these shows. My sister came to visit and since I had them on streaming she got to see them and can’t get enough of watching.

I absolutely love this series~~~it is truly heart warming! It is truly a breath of fresh air! A good, clean show that you can sit & watch with your spouse , parents or kids without any embarrassing scenes or bad language. PLEASE KEEP THIS SERIES!

I love the show but agree the range of episodes are much shorter. Online it shows 12 shows but it ended tonight June 13 which is only 9 shows since it started. Please set yourself Hallmark aside and do not cancel a great warming story like the big networks do when they should give it a chance. Great cast and very entertaining Its Saturday night so why would you even expect huge ratings its the death night for some shows this one has a following KEEP IT PLEASE!

There were 10 total episodes this season. The 2 hour shows counted as 2 eps. I’m just grateful we got a second season because we almost did not get it at all. But be sure and tweet or write the Hallmark and let them know you want a season three. I believe we will with how it ended. You wouldn’t believe how much that affected their decision last year.

I love the show, but why are the season finales getting shorter and shorter? Is it money, money, or don’t actors want to work as long anymore. You advertise for months that the show is returning, and then 5 weeks after the first episode, it’s the season finale already. No one understands!!!

i love the show, but why are the “seasons” getting shorter and shorter? I can only think of “money, money” or actors not wanting to work as long as they used to. What’s up?

I have watched WHEN CALLS THE HEART since they showed the movie. I love the show it a wonderful show. I hope Hallmark keeps it on for a long time. It is the highlight of my week. To bad towns don’t work and care about each other like that any more. Please keep it on Halmark

‘When Calls the Heart ‘ lifts & humbles my spirit . As a teacher I find the programming especially entertaining. Hallmark allows me to escape the sometimes conflicting & confusing world behind and escape to a time of being really unplugged. I think about my ancestors who helped be where I am today through their grit and goodness.