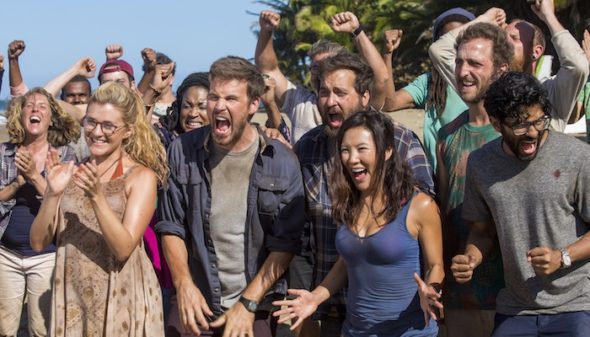 TBS is heading back to the island. Today, the network announced they’ve renewed Wrecked for a third season.

Wrecked has been a breakout hit for TBS since it debuted in 2016. While ratings did slip for season two, the season still averaged a decent .39 rating in the 18-49 demo and 1.003 million viewers. The network has not yet announced a premiere date for season three.

What do you think? Do you watch Wrecked? Are you glad there will be another season?

Glad it will be returning. One of the best shows out there.

Love this series, was a “Lost “ fan and this sendup cracks me up!

I love this show. Its been. A long time since a show has literally made me laugh out loud. My boyfriend and I binge watched all the episodes and can’t wait till next season! Please don’t cancel this show! And the acting is on point ,perfect delivery. Love it

Wrecked is awesome! Great comedy show and be happy when it comes out for season 3.

SO stinkin excited to see this is coming back! Great comedy!

My husband is going through chemotherapy and this show was one of the few that made him laugh…this one and People of Earth. Thank you TBS!!!

My husband and I love Wrecked. For him to laugh means it is genuinely funny!
We are so glad Season 3 is coming because Season 2 finished with a cliffhanger situation. Thanks!!

This show is funny because you dont know whats coming next. I wish theyd hurry up with season 3 already!! Its a great change from reality tv!

In a world of bad news I actually laugh out load…which I rarely do. Love this show! Characters are perfectly cast, and funny!

Yes the show is hilarious. I’m so happy it’s been renewed for season 3!

I watch it and it is my favorite comedy. Second favorite show after GOT. I can’t believe renewal was even in question. This is a great show.

Yea! I just watched it and I love it!!

This show is so much fun…..cracks me up. Looking forward to S3

Oh my god this is great!

In other words, TBS bought itself a third season of ratings pin. It’s tough watching the US TV industry self-destroy with so much enthusiasm…

Congrats to the person who wrote the article and mentioned the real overnight ratings, instead of just copying the PR nonsense quoted below. 🙂

I meant “pain” not “pin”, although I hear pins can be painful… 😉