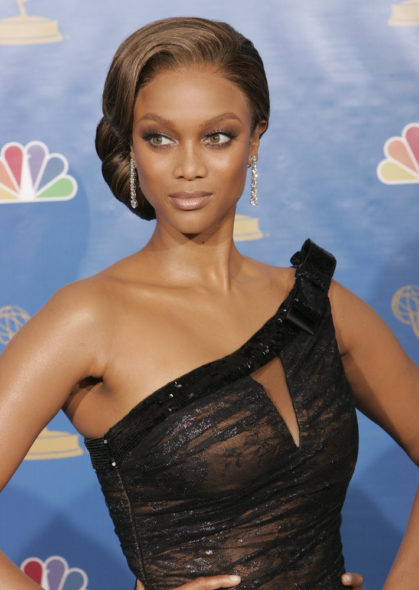 As reported last month, it seems Nick Cannon really won’t return for the upcoming 12th season of the America’s Got Talent TV show on NBC. The network has announced Tyra Banks will replace him as host of the summer series.

Returning for America’s Got Talent season 12 are creator and judge Simon Cowell, along with judges Mel B, Heidi Klum, and Howie Mandel. Get the skinny from this NBC press release.

UNIVERSAL CITY, Calif. — March 12, 2017 — Emmy Award winner Tyra Banks, who created and executive produced “America’s Next Top Model” for 23 cycles, headlined her own talk show, is consistently ranked by Time magazine as one of the world’s most influential people and serves as CEO of her own multimillion-dollar beauty company, has joined NBC’s “America’s Got Talent” — summer’s most-watched show — as host for the upcoming 12th season.

Banks said: “Since I was a little girl, I’ve been obsessed with grandiose acts and performers who make the seemingly impossible possible. I love how ‘AGT’ brings that feeling into everyone’s home, capturing the best of people who come out and give it their all to make those big, fierce and outrageous dreams come true. I look forward to connecting with the dreamers, having fun and giving hugs and words of encouragement when needed. And maybe I’ll get one or two performers to smize for the audience!”

“Welcome to the ‘America’s Got Talent’ family, Tyra! This is really exciting,” said Simon Cowell, executive producer, judge and creator of the “Got Talent” format.

“Tyra is the complete package: Out-of-this-world talented, funny, brilliant and all heart. In whatever she has done, she has always connected with audiences around the world,” Telegdy said. “Her vivacious spirit will infuse ‘AGT’ in a big way.”

“Not only is Tyra smart and beautiful, she’s also warm, compassionate and a lot of fun,” said Trish Kinane, President of Entertainment Programming, Fremantle North America. “She will fit right into the crazy world of ‘AGT.’”

Expanding the definition of beauty is something Tyra Banks has always believed in, as a supermodel and as a super-businesswoman. Six modeling agencies rejected her before she was signed at the age of 15 years old. Now, hundreds of magazine covers and thousands of runways later, Banks grooms the next generation of models to make their dreams come true.

She created and executive produced the first and longest-running fashion competition-based reality television series, “America’s Next Top Model,” with 23 cycles. “ANTM” currently airs in 186 countries and has 26 international versions that span from Asia, Africa and Australia.

As an original Victoria’s Secret angel, Banks was also the first model to grace the cover of GQ and the first African-American model to be featured on the covers of Sports Illustrated swimsuit issue, which featured her for two consecutive years, and the Victoria’s Secret catalog. She was named one of Hollywood Reporter’s 100 Most Powerful Women in Entertainment and Entertainment Weekly’s 25 Smartest in Television. She was honored as one of Glamour magazine’s coveted Women of the Year, alongside former U.S. Secretaries of State Condoleezza Rice and Hillary Rodham Clinton.

She won two Emmy Awards for “The Tyra Show,” the first show ever to receive the award in the new informative category. Her infamous line, “Kiss my fat ass!” made TV Guide’s 60 Greatest Talk Show Moments. She was listed twice on Time magazine’s 100 Most Influential People in the World and took the #1 spot on Forbes’ list of top earning women in primetime for two years in a row.

Banks is CEO of the Tyra Banks Company — a place where beauty meets entertainment. In 2012, she graduated from the Owner/President Management program at Harvard Business School and is a proud alum. She recently developed Fierce Capital, the investment arm of the Tyra Banks Company, which invests in early-stage companies, including firms that are female-led or female-focused. Her passion is the TZONE Foundation, a non-profit organization that invests in young women to help them realize their ambitions and approach life’s challenges with fierce determination. The TZONE now takes residence at the Lower Eastside Girls Club Center for Community in New York City and focuses on five core pillars: entrepreneurship, financial literacy, elocution and self-presentation, health and wellness, and self- esteem, beauty and body image.

Most recently, Banks created a one-of-a-kind cosmetics experience – TYRA Beauty. With a radically fierce, fresh and unique approach to the beauty industry, TYRA Beauty is powered by the strategic collision of beauty and entertainment, coined “Beautytainment” by Banks. TYRA Beauty is a 100% self-funded company and is a dream near and dear to Banks’ heart with the goal of creating a legacy brand that provides anyone and everyone the opportunity to become the CEO of her or his own life.

“America’s Got Talent” has reigned as television’s #1 most-watched summer alternative series for each of its 11 seasons on the air and last summer surged to its highest adult 18-49 average (a 3.0 rating) in three years and most-watched season (13.5 million viewers) in five years. It also earned more than 1 billion video views across its far-reaching social media handles.

Returning for season 12 are creator and judge Simon Cowell, Mel B, Heidi Klum and Howie Mandel. The series returns to Los Angeles this summer with live shows from the famed Dolby Theatre.

With the search open to acts of all ages and talents, “America’s Got Talent” has brought the variety format back to the forefront of American culture by showcasing unique performers from across the country. The series is a true celebration of creativity and talent, featuring a colorful array of singers, dancers, comedians, contortionists, impressionists, jugglers, magicians, ventriloquists and hopeful stars, all vying to win America’s hearts and the $1 million prize.

VanderWaal went on to release her first EP, titled “Perfectly Imperfect,” which became the highest-selling EP of 2016, demonstrating the power of “AGT” to create an instant star. Also, her “Got Talent” audition video was one of the top trending videos of the year and currently has over 135 million views.

The “Got Talent” format, created by Simon Cowell and co-owned by Syco Entertainment and FremantleMedia globally, holds the Guinness World Record as the most successful reality TV format of all time, airing in 186 countries and having been commissioned in 68 territories worldwide. Around the world more than 500 million people watch “Got Talent” every year. “Britain’s Got Talent” has remained the U.K.’s #1 entertainment show since it first launched in 2007 and discovered global singing sensational Susan Boyle, who has sold 23 million records to date.

What do you think? Is Tyra Banks a good choice for the new America’s Got Talent TV show host? Do you plan to tune in for season 12 of AGT, this summer, on NBC?

NO!!! When I think AGT I automatically think of Nick Cannon as the host. I just don’t think that Tyra has the personality to host this type of show. No offense but to me she seems a little cold and stiff. Maybe I will be proved wrong and if I am I will be the first to admit it.

No offense but personally I don’t think Tyra is a good fit for America’s Got Talent. In fact I cannot picture any Woman being the Host, and I know I’ll get a lot of hate comments saying that.