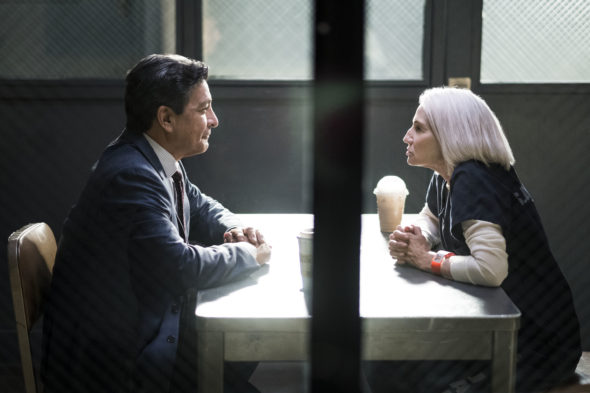 “I’m gonna take it all.” TNT just released the premiere date and a new trailer for season four of Animal Kingdom.

Based on the 2010 film, the drama series revolves around a 17-year-old who moves in with relatives — a family clan of criminals. The cast includes Ellen Barkin, Scott Speedman, Shawn Hatosy, Ben Robson, Jake Weary, Finn Cole, Daniella Alonso, and Molly Gordon.

Season four of Animal Kingdom premieres on TNT on May 28th at 9 p.m. ET/PT.

This summer, the ruthless Cody crime family returns in Animal Kingdom season four and they will be as much of a threat to each other as they are to their targets. The series stars Emmy® and Tony® winner Ellen Barkin, Shawn Hatosy, Ben Robson, Jake Weary, Finn Cole and Sohvi Rodriguez. Emily Deschanel also joins the cast this season in a recurring role. The fourth season of Animal Kingdom premieres Tuesday, May 28 at 9 p.m. ET/PT.

This season, Smurf (Barkin) is back on top reminding her boys who’s boss no matter whom she hurts in the process. Trapped with Smurf and becoming increasingly unhinged, Pope (Hatosy) has found new and dangerous ways to deal with his anger. J (Cole) continues to scheme about how to take over the family business, Craig (Robson) plots one of their most difficult heists and Deran (Weary) is worried about his future with Adrian (Spencer Treat Clark). As always, outsiders move in to threaten the Cody’s fragile peace, including Angela (Deschanel), the former best friend of J’s deceased mother and a recovering junkie, who tries to snake her way back into the family’s good graces. A new criminal crew is also introduced with a surprising connection to the Codys.”

What do you think? Do you watch Animal Kingdom? Are you excited for the new season?

I love this show. Is there another season? Will the boys carry on the legacy of crime so the audience can see closure of all the family members?
Thank you for your reply.

I absolutely love this show, I’ve been saddened over a few things that have happened, but I don’t want it to ever end.