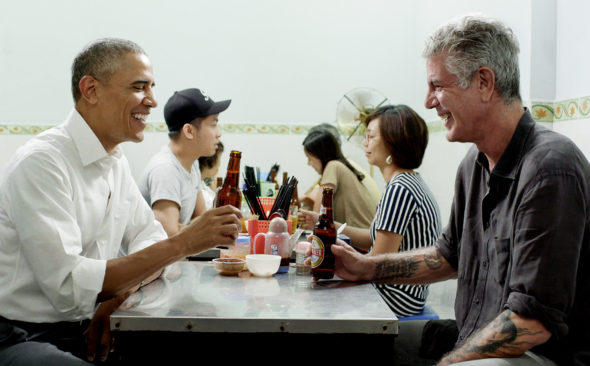 Season 11 of the top-rated Emmy and Peabody award-winning CNN Original Series Anthony Bourdain Parts Unknown begins on Sunday, April 29 at 9pm ET/PT with a trip to West Virginia, in a special extended episode.

The eight-episode season, which follows the veteran chef and best-selling author as he travels the globe in a celebration of diverse foods and culture, will also feature tours of Newfoundland, Uruguay, Armenia, Bhutan, Berlin, U.S. Cajun country, and Hong Kong.

To whet the appetite for the new season, CNN offers the latest edition of Prime Cuts, premiering on Sunday, April 22 at 9pm ET/PT, and featuring a reflection of season 10 locations with a snapshot of things to come.

Following are the locations and episode descriptions for season 11 of Anthony Bourdain Parts Unknown:

West Virginia (season 11 premiere: April 29 – special extended episode 9pm-10:15pm ET) Bourdain digs deep into the proud, often misunderstood culture of West Virginia, as he traverses a 5,000 foot mine, observes the demolition derby-like sport of rock-bouncing and dines on signature Appalachian dishes. Bourdain’s own preconceptions are dashed as he finds the West Virginian attitude to be a remarkable dichotomy, both resolute and open-minded. Over an assortment of local dishes – snapping turtle patties, squirrel gravy, pawpaw ice cream, spaghetti pie, and bear meat – residents candidly discuss their staunch views on the second amendment, Donald Trump, life beyond the coal industry, and the reclamation of West Virginian cuisine.

Uruguay (airdate: May 6) Bourdain returns to Uruguay after a decade away and finds a progressive nation in the midst of social change, but with evident fragments of its colonial past, most notably in its local cuisine. Accompanied by Uruguayan native and restaurateur/chef Ignacio “Nacho” Mattos, the two visit his hometown of Santa Lucia for a home cooked Italian family meal made by his grandmother, head for a night out in Montevideo with local band Hablan Por La Espalda, sample drive-thru steaks, and cap off the trip with an asado (barbecue) with friends on a small island in Jose Ignacio.

Newfoundland (airdate: May 13) An exploration of this rocky, east coast Canadian island by Bourdain reveals a magical place abundant in fish and wild game and steeped in distinctive traditions. Guided by prominent chefs Frederic Moran, Jeremy Charles and David McMillan, the host takes part in cod fishing, moose hunting, and axe throwing and dines on charred whelk with brasciola, caribou tartare, and Newfoundland classic Jiggs Dinner (boiled meat & vegetables). A side trip to the nearby French archipelago of St. Pierre is the setting for a home cooked meal of sea urchin p�té, stuffed squid over rice and braised halibut.

Armenia (airdate: May 20) Bourdain takes a wide-angle look at the culture and history of this country, heavily influenced by Europe and Russia, with guides musician of Armenian descent Serj Tankian (System of a Down), and historian/Armenian resident Richard Giragosian. Breaking bread with Tankian at the restaurant Dolmama in Yerevan, during dinners with locals, the host explores the native and diaspora Armenian populations’ survival and achievements against the odds.

Hong Kong (airdate: June 3) Hong Kong, a city that’s always in transition and unapologetically modern has another side… a beautiful one that’s in danger of disappearing entirely. Bourdain experiences this city through the eyes and lens of legendary cinematographer and longtime Hong Kong resident Christopher Doyle (Chungking Express, In the Mood for Love, The White Girl).

Berlin (airdate: June 10) In Berlin – an anomaly among German metropolises – Bourdain encounters an extremely accepting society, teeming with unbridled creativity, despite a grim history. Against the backdrop of Berlin Wall remnants, the host communes with musician Anton Newcombe (Brian Jonestown Massacre) for a home-cooked meal, and electronic artist Ellen Allien over a lunch of sausage made from chicken, pigs feet and sage at Michelberger. Bourdain also mixes in with photographers, club bouncers, cabaret owners, and historians, to discuss this city’s unparalleled culture.

Cajun Mardi Gras (airdate: June 17) In this celebration of Louisiana’s Cajun culture, complete with Zydeco music and a crawfish boil, Bourdain goes off the beaten path and takes part in the less familiar Mardi Gras traditions of the region’s history stemming from the French Middle Ages. Donning a conical hat, mask and colorful fringed costume, the host participates in the day long Courir de Mardi Gras in Mamou. Meals include a home cooked meal in Grand Coteau, lunch at Laura’s 2 in Lafayette with creole cowboys, and boudin & cracklings at Billy’s in Opelousas.

Bhutan (airdate: June 24) Bourdain and film director Darren Aronofsky (Requiem for a Dream, Black Swan) tour the remote South Asian Kingdom of Bhutan and travel on the winding East/West highway known for its spectacular views of the Himalayan Mountains. The seasoned explorers share a meal with yak herders, visit the capitol city of Thimphu for traditional Bhutanese cuisine, drive to Punakha to explore the village of legendary divine monk Drupka Kinley, and visit Bumthang for a bamboo archery competition.”

What do you think? Are you a fan of Anthony Bourdain: Parts Unknown? Will you watch the new season?