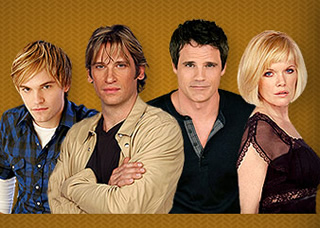 Another venerable soap opera has fallen. CBS has announced that they’re cancelling As the World Turns after 54 years on the air.

In the wake of the cancellation of Guiding Light earlier this year, the soap’s cancellation doesn’t come as a big surprise. Like Guiding Light, World has been struggling in the ratings for some time. Both shows were produced by Proctor & Gamble (via TeleNext Media) and, for the first time in more than 75 years, the company will be out of the soap opera business.

World’s viewership is about half of that of The Young & the Restless. Ultimately the success of Light’s replacement, the new Let’s Make a Deal, is what may have sealed the soap’s fate. Deal is attracting more viewers, provides a better lead-in for The Price Is Right, and is much cheaper. There’s no word yet on what will replace World but it will likely be another game show.

Eileen Fulton, who’s played Lisa Grimaldi on the soap for 50 years, said, “It’s a hell of a Christmas present… I’m just very sad. I’m sad for all of the people who work out there in Brooklyn (where the show’s filmed). We’re a family. I hate to be split up. It’s like a divorce.”

World executive producer, Chris Goutman, said, “Throughout our history, As The World Turns has remained dedicated to sharing compelling stories that have entertained fans for more than five decades… We are disappointed and saddened by the news that the show is not being renewed. It will certainly be a loss for all of us, and for the show’s loyal audience.”

Brian Cahill, the senior vice president and managing director of TeleNext, says that the company is actively seeking a new home for the show. The same was said when Light was cancelled but another outlet wasn’t found and it ended in September. NBC was able to keep Passions alive for an extra season by making a deal with DirecTV.

Production will continue on World with the final episode set for September 2010. That will give the writers plenty of time to wrap up storylines should the sun be finally setting on the characters of Oakdale, Illinois.

NOOOOOOO not another game show. ATWT must be more of a draw than any lame game show. can’t believe they are cancelling another one. GL was enough. this company needs to listen to the fans. SAVE ATWT!

please save ATWT! it is my favorite show. My family and home. I love it! ATWT KEEP TURNING PLEASE!

We have to do what we can to save ATWT, they are killing soap operas off one by one and life will never be the same if we let this happen!

I am a die hard ABC soap fan, I don’t know what I would do if All My Children, ONe life to Live or General Hospital was cancelled. I understand where you all are coming from. Please do what you can to save these soaps. They give us something interesting to look forward to on TV. This is woman soaps equivalent to Sunday football!

Please do whatever it takes to save this show. I’d love for Guiding Light to return, too. Surely one of the lesser channels would be happy to have these shows.

Do the people @ CBS have a clue what their viewers like anymore? It would seem every time they have a decent show on the air they cancel it or replace it with yet another CSI, game show or reality show. If I really wanted to watch a game show there is always the Game show network or the Discovery channel for real survival shows. As far as B&B goes how many guys can Brooke sleep with? She has already had them all and some of them twice or more. I lost intrest in the Y&R years ago for the… Read more »

Please reconsider your decision to cancel another long time running CBS soap, “ATWT. First it was “GL” and now “ATWT.” Fans of GL still have not recovered from GL cancellation. Now, the network wants to pull the plug on ATWT! I see a pattern developing here. One that does not say much for the loyalalty the fans have given to both osf the aforementioned soaps. All the GL fans petitions unfortunately did not save the show’s demise. : ( Please this time let it be different. Save ATWL from being another defunct soap. Pleaaaase CBS find it in your heart… Read more »

I was shocked to find that ATWT was going to be cancelled. What is going on with the people that make these decisions. I have watched since I was a young child. I am 57 yrs. old and have watched and kept up with the show when I wasn’t able to watch when working. I purchased a radio with tv sound way back and the other women in my office and I listened in. One thing I have looked forward to for retirement is being able to watch my soaps. Guiding Light is gone now and it looks like ATWT… Read more »

PLEASE LEAVE AS THE WORLD TURNS ON PRETTY PLEASE IF IT LEAVES WHAT ARE WE JUST GOING TO HAVE DUM TALK SHOWS. WHEN I WATCH MY SOAPS THEY ARE MY RELAX TIME . PLEASE DON’T TAKE IT A WAY