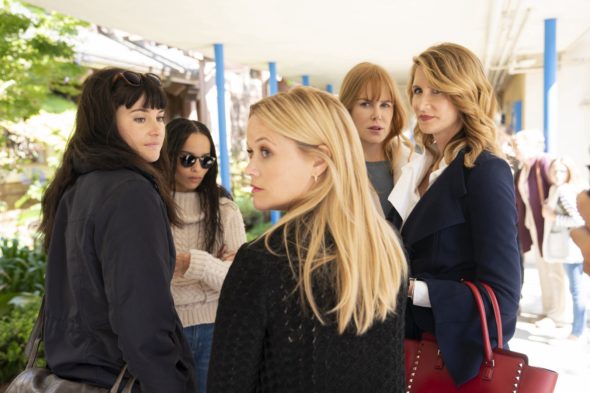 Has the truth come out? Is the Big Little Lies TV show cancelled or renewed for a third season on HBO? The television vulture is watching all the latest cancellation and renewal news, so this page is the place to track the status of Big Little Lies season three. Bookmark it, or subscribe for the latest updates. Remember, the television vulture is watching your shows. Are you?

The second season of Big Little Lies averaged a 0.43 rating in the 18-49 demographic and 1.64 million viewers. Compared to season one, that’s up by 2% in the demo and up by 40% in viewership. Find out how Big Little Lies stacks up against the other HBO TV shows.

Will HBO cancel or renew Big Little Lies for season three? This one is tricky. Ahead of its 2017 debut, the cast of big stars said that they were only making one seven-episode season. Now they’re back for more. I suspect this is the end but HBO would take another season if they could get it. I’ll update this page as the season progresses. Subscribe for free updates on Big Little Lies cancellation or renewal news.

What do you think? Do you hope the Big Little TV show will be renewed for a third season? How would you feel if HBO cancelled this TV show, instead?

Please please renew this program!! It is soooooo wonderful. Everyone I know agrees!!