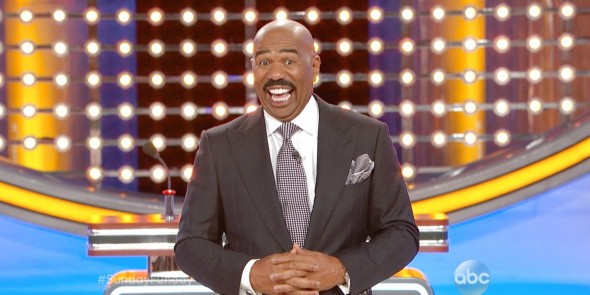 Let the feuds begin. ABC has announced the teams for the upcoming new season of Celebrity Family Feud.

Hosted by Steve Harvey, season two will once again feature teams of celebrities and their families battling against each other for charity. The new season will feature Lance Bass, Kellie Pickler, Snoop Dogg, Davey Foley, Paula Deen, and many more.

Check out the full team details below:

The primetime summer hit “Celebrity Family Feud,” produced by FremantleMedia North America, returns for a second season on SUNDAY, JUNE 26 (8:00-9:00 p.m. EDT), on the ABC Television Network. Steve Harvey, the highly popular multi-hyphenate standup comedian, actor, author, deejay and Emmy Award-winning game show host, will pit celebrities and their families against each other in a contest to name the most popular responses to a survey-type question posed to 100 people.

In each episode of “Celebrity Family Feud,” celebrity families, and their immediate family members or their extended TV families, will compete against each other to win money for charity. Each team will be made up of a celebrity captain, with four relatives or friends playing along. The winning celebrity team will be given a chance to win up to $25,000 to donate to a charity of their choice.

Following are the celebrity captains, their teams, and the charities they are playing for:

Alana Stewart – Actress and producer known for “Farrah’s Story,” “George & Alana” and “I’m a Celebrity, Get Me out of Here!” is playing for the Farrah Fawcett Foundation
George Hamilton – Actor and Golden Globe recipient, known for “Love at First Bite” and “Where the Boys Are”
Ashley Hamilton – George’s son
Sean Stewart – George’s stepson
George Thomas Hamilton (G.T.) – George’s son

What do you think? Are you a fan of Celebrity Family Feud? Will you watch the new season?

I am a fan of Celebrity Family Feud and I’ll watch all 10 episodes.
Best spin-off game show ever!