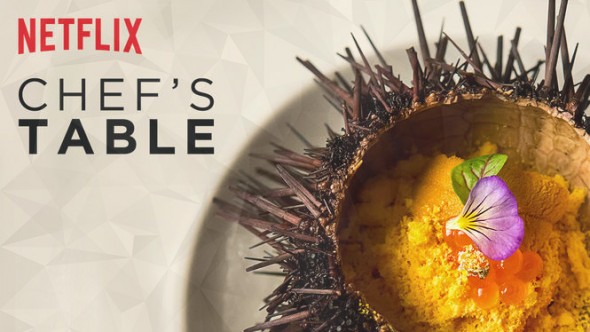 Are you a big time foodie? Netflix just announced their food series programming for 2019-20 season, which includes new episodes of Chef’s Table and Somebody Feed Phil as well as the new series The Chef Show.

A celebrity cooking series, The Chef Show will see actor/director Jon Favreau and chef Roy Choi “experiment with their favorite recipes and techniques, baking, cooking, exploring and collaborating with some of the biggest names in the entertainment and culinary world.” Guests will include Gwyneth Paltrow, Bill Burr, Robert Downey Jr, Tom Holland, and more.

The Chef Show debuts on Netflix on June 7th. Meanwhile, Netflix has ordered new episodes of Somebody Feed Phil and two more seasons of Chef’s Table.

Take a sneak peek and The Chef Show and read more details below:

Cooking is a journey. And making a meal is about more than just food. It’s about appreciating friends, family and tradition. An opportunity to come together. To learn, to share and to celebrate different flavors, cultures and people. In The Chef Show actor/director Jon Favreau and award-winning Chef Roy Choi reunite after their critically acclaimed film Chef to embark on a new adventure. The two friends experiment with their favorite recipes and techniques, baking, cooking, exploring and collaborating with some of the biggest names in the entertainment and culinary world. From sharing a meal with the Avengers cast in Atlanta, to smoking brisket in Texas with world-renowned pitmaster Aaron Franklin, to honoring the legendary food critic Jonathan Gold in Los Angeles – Favreau and Choi embrace their passion for food, but more importantly their love for bringing people together over a delicious meal.

“During the production of Chef, I developed a much deeper understanding of the ways in which we express our emotions, share our cultures and seek meaningful connections through the act of cooking and eating,” says Favreau. “I am so nostalgic about that time and those experiences — this series gives me the perfect opportunity to get back in the kitchen and create some new memories.”

“I’ve always wanted a straight up cooking show since I was a child,” said Choi. ” I grew up on Julia Child, Paul Prudhomme, Sara Moulton, and obviously Emeril’s first show had a huge impact on my life. There is something timeless and beautiful about cooking straight to camera. The only snafu was, I’m not a natural born entertainer so doing it alone was always out of the question! But then I met Jon and we built such an amazing friendship over the movie, Chef. We both kinda didn’t want it to end. And through this friendship I found my cooking soulmate and a child’s dream is now a reality. Julia and Jacques meet Jon and Roy!”

The long-running, Emmy-nominated documentary series Chef’s Table will return with two new seasons. Currently in its sixth season, the critically-acclaimed series follows celebrated chefs from around the globe as they pave their own path in the culinary world. The new volumes will bring to light the rich history, passion and drive of eight remarkable food visionaries. Chef’s Table is created by David Gelb and produced by Supper Club and Boardwalk Pictures. For Supper Club, executive producers are David Gelb and Brian McGinn; for Boardwalk Pictures, executive producer is Andrew Fried and co-executive producer is Dane Lillegard.

Beloved eater and traveler Phil Rosenthal returns for ten new episodes of global adventures, laughter and of course … food! Somebody Feed Phil, the Netflix original series from the creator of Everybody Loves Raymond, follows Emmy and James Beard Award-winner and Critics’ Choice Award nominee Phil Rosenthal on a goodwill eating tour of the world as he explores new cultures and cuisines. Along the way, Phil is joined by family, friends new and old, and his trademark sense of humor. Somebody Feed Phil is produced by Lucky Bastards and Zero Point Zero Production, Inc. For Lucky Bastards, executive producers are Phil Rosenthal, Rich Rosenthal and John Bedolis. For Zero Point Zero, executive producers are Christopher Collins and Lydia Tenaglia.

The announcements were made as part of Netflix’s FYSEE Food Day where guests enjoyed a variety of panels and activations, hosted by Queer Eye’s Antoni Porowski. The day celebrated Netflix’s delicious food content including interactive demonstrations with Samin Nosrat of Salt Fat Acid Heat with Samin Nosrat, and Nicole Byer and Jacques Torres of Nailed It!. Photos from the day can be found here.”

What do you think? Do you watch any of Netflix’s culinary series? Will you watch The Chef Show?