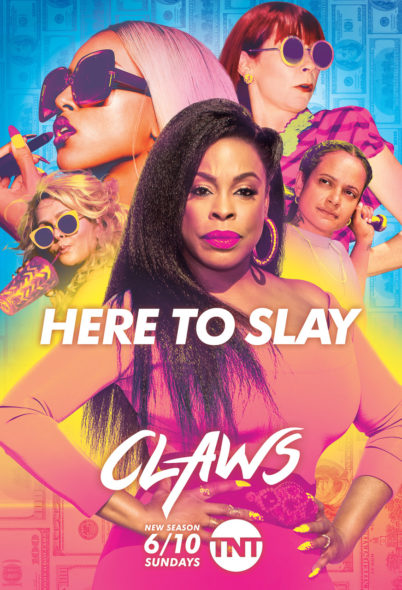 Does the second season of the Claws TV show on TNT have you in its clutches? As we all know, the Nielsen ratings typically play a big role in determining whether a TV show like Claws is cancelled or renewed for season three. Unfortunately, most of us do not live in Nielsen households. Because many viewers feel frustration when their viewing habits and opinions aren’t considered, we’d like to offer you the chance to rate all of the Claws season two episodes here. **Status update below.

What do you think? Which season two episodes of the Claws TV series do you rate as wonderful, terrible, or somewhere between? Should TNT cancel or renew Claws for a third season? Don’t forget to vote, and share your thoughts, below.

I really enjoy the raw humor and day to day antics of real life that people should see how hard life can be if your not handed life to you and you have to work for everything even if it means getting dirty sometimes… Love how tv puts a spin on everything.

I have been very disappointed by the the past 3 episodes of Claws. I love the series, and all the dysfunction–but the song-and-dance routine was out of place (no matter the message) it was cheesy. While Dean delivered a powerful statement on abortion, “…you protest abortion, but where are you after these children are born…?” and the “Brady Bunch”-style pro and con comments could have been left out completely. The Desna and Dean backstory could have been significantly abbreviated. I felt I had wasted 40 minutes watching that and, in my opinion, it didn’t really add anything to the story… Read more »