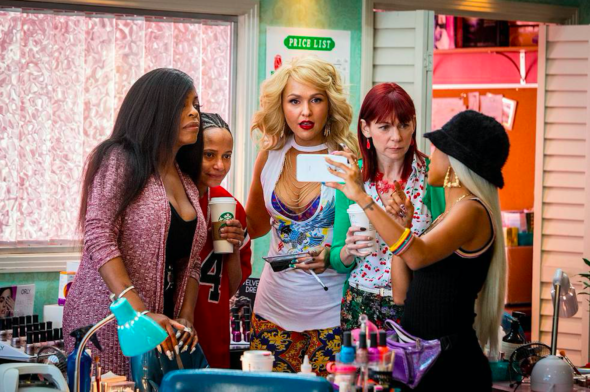 What’s in store for Desna and the girls? Has the Claws TV show been cancelled or renewed for a third season on TNT? The television vulture is watching all the latest cancellation and renewal news, so this page is the place to track the status of Claws, season three. Bookmark it, or subscribe for the latest updates. Remember, the television vulture is watching your shows. Are you?

The second season of Claws averaged a 0.46 rating in the 18-49 demographic and 1.29 million viewers. Compared to season one, that’s down by 3% in the demo and even in viewers. Learn how Claws stacks up against other TNT TV shows.

Although it premiered with better numbers than last year, it is still too soon to use the ratings to predict whether TNT will cancel or renew Claws for season three. For now, I’ll keep an eye on the Nielsens and update this page with breaking developments. Subscribe for free Claws cancellation or renewal alerts.

**7/2/2018 Status Update: Claws has been renewed for season three on TNT. Details here.

What do you think? Did you think the Claws TV show would be renewed for season three? How would you feel had TNT cancelled this TV series, instead?

Please renew for a 3rd season

I hope CLAWS goes to season three! It will be interesting to see how it plays out after the season 2 finally. I will be waiting with baited breath to see what happens with Desna and the crew!