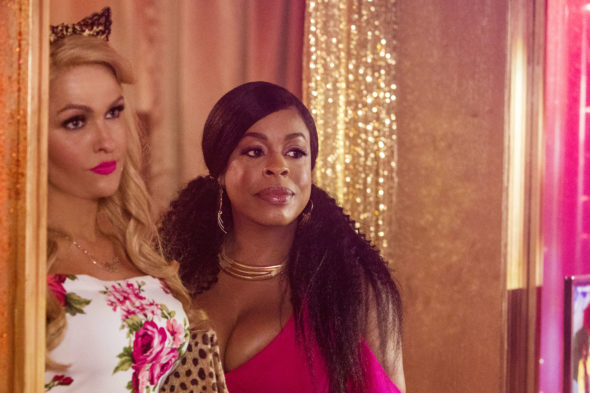 The ladies of the Nail Artisan of Manatee County Salon really have dug their claws into the audience. TNT has renewed its Claws TV show for a third season. The early renewal comes after just three episodes of the series’ sophomore outing.

The second season of Claws is averaging a 0.45 rating in the 18-49 demographic and 1.20 million viewers. Compared to season one, that’s down by 4% in the demo and down by 6% in viewers. Learn how Claws stacks up against other TNT TV shows.

Today, TNT also renewed Animal Kingdom for a fourth season. Learn about both renewals from this TNT press release.

What do you think? Are you still watching the Claws TV series? Do you plan to tune in for season three on TNT?

Great show! Keeps me on the edge of my seat. Excited for the new season.

I love this show!! I really can’t believe any one even considered canceling this series. It’s so addicting, I binged watched both season every episode back to back one time after an argument with my husband. I stood in the room with the door locked for hours it was great! Please give me current info on when third season is going to hit the screen. I’ve been checking the TNT app Everyday!!!
Much Love!!!
Oh yeah one more thing,
HATERS GONNA HATE!!!
(It’s in their nature they can’t help it LOL)

Love this show!! It’s addictive. The actors do an excellent job!!!

I LOVE this show! My biggest complaint about it is- the season is not long enough. There’s only about 10 shows in each season. Pfttt! I want more! And I certainly don’t get any sort of political slant to it. I take it for what it’s worth, a silly fun romp.

LOVED your show last season; this season, not as much. PLEASE PLEASE PLEASE take out the political statements. The show doesn’t need it to be great. I think we all could use a break from politics no matter what side of the aisle you’re on.

I LOVED this show last season; this season, not as much. PLEASE PLEASE PLEASE leave out the political stuff. Your show doesn’t need it. I think we all could use a break from politics!!!

The ratings aren’t that great for this programming. Why the hell they renewed it is beyond rationalization.