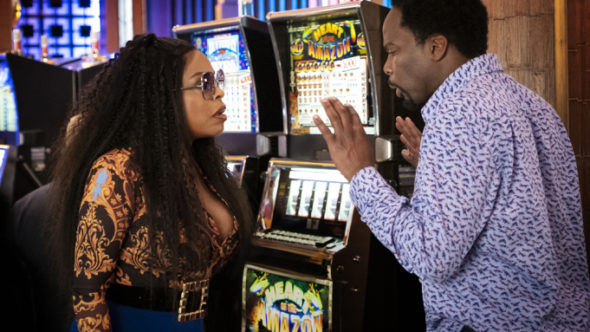 The Nail Artisans of Manatee County salon is closing. TNT has announced that the Claws TV show has been renewed for a fourth and final season. Season four is expected to air sometime in 2020 and an episode order hasn’t been announced yet.

October 1, 2019 – TNT will be wrapping up its hit drama Claws with a fourth and final season. Since its launch in 2017, the series has won critical praise and a loyal fan following. Viewers have responded to the queenly rise of Desna Simms (Niecy Nash), who, alongside her crew of manicurists from the Nail Artisans of Manatee County salon, rises to power in the crime world to claim her share of cash and respect.

“For the past three seasons, Claws has handled delicate and culturally relevant themes like race, class, gender, age and sexual orientation with grace and humor via superb storytelling,” said Brett Weitz, General Manager for TNT, TBS, & truTV. “Fans cherish the over-the-top Clawsian moments that have defined its run, and we will do them justice as we wrap up the tale of Desna and her crew.”

The series and cast have earned overwhelming critical praise, with the Los Angeles Times declaring “…Claws is the perfect show for our time.” Vanity Fair labeled Claws the “perfect match for any summer day, while Vulture heralded the show as an “uproarious, emotionally moving ode to women’s quests for autonomy.”

About TNT
TNT, a WarnerMedia Entertainment brand, is basic cable’s #1 network in primetime among young adults and is home to some of television’s most popular original series, including The Alienist, Animal Kingdom, Claws, I Am the Night and the upcoming sequel The Alienist: The Angel of Darkness. TNT’s premium unscripted series include the live multiplatform event Chasing the Cure and the forthcoming Shaq Life. TNT also presents popular shows such as Bones and Castle; primetime specials and sports coverage, including the NBA and NCAA Division I Men’s Basketball Championships and the upcoming professional wrestling league All Elite Wrestling (AEW).
Website: www.tntdrama.com

What do you think? Do you like the Claws TV show? Will you watch season four? Do you think the series should be ending or renewed for a fifth season?