“The system is broken and you people broke it.” Netflix has just released a new trailer and key art for season three of Designated Survivor. 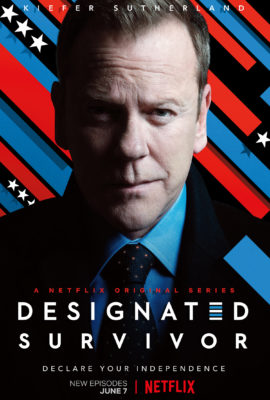 The high-stakes political thriller stars Kiefer Sutherland as a low-level cabinet member who is suddenly catapulted to the position of President of the United States after a devastating terrorist attack strikes during the State of the Union, killing all those ahead of him in the presidential succession line.

In season 3 President Kirkman faces a political reality…campaigning. What does it take to make a leader? What price will he be willing to pay? This season will explore today’s world of campaigning, smear tactics, debates, campaign finance and “fake news.” Democracy, as we know it, will hang in the balance.

What do you think? Have you seen Designated Survivor? Will you watch the new season?

I am SO stoked! It was a happy surprise to see this coming on Friyay!

Thank you for picking this up. Loved the show and. Can’t wait till June to see what happens next.

I will definitely watch season 3 of Designated Survivor!!

I will definitely watch season 3 of Designated Survivor.

I think this is gonna be the best and most exciting season yet.