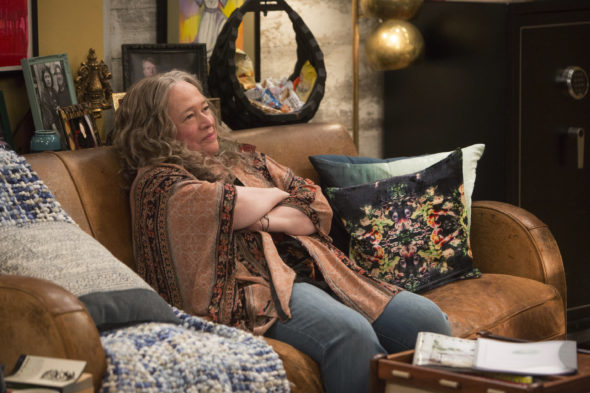 Is Ruth still living the dream? Has the Disjointed TV show been cancelled or renewed for a second season on Netflix? The television vulture is watching all the latest TV cancellation and renewal news, so this page is the place to track the status of Disjointed season two. Bookmark it, or subscribe for the latest updates. Remember, the television vulture is watching your shows. Are you?

Streaming on the Netflix paid subscription platform, Disjointed stars Kathy Bates, Dougie Baldwin, Elizabeth Ho, Chris Redd, Tone Bell, Aaron Moten, Elizabeth Alderfer, Betsy Sodero, Nicole Sullivan, Michael Trucco, and Mae Harrington. This workplace comedy centers on Ruth Whitefeather Feldman (Bates), who has long agitated for the legalization of cannabis. After years of advocacy, she is finally the proud proprietor of a Los Angeles-area marijuana dispensary. Ruth’s staff consists of her 20-something son, Travis (Moten), three budtenders, and a security guard. If this crew had an anthem, surely it would be Bob Dylan’s “Everybody Must Get Stoned.”

Netflix ordered 20 episodes of this series out of the gate and decided to break them up into two “seasons”. Since only Netflix knows what they consider to be a success when it comes to viewership, it is tricky to gauge the performance of TV shows like Disjointed — unless Netflix publicizes its success. For now, I’ll keep an eye out for any new developments and update this page as they break. Subscribe for free updates on any Disjointed cancellation or renewal news. I’ve got to fly. I suddenly have a severe case of the munchies.
2/14/18 update: Netflix had cancelled Disjointed after two seasons and 20 episodes. Details here.

What do you think? Were you hoping that the Disjointed TV show would be renewed for a third season? Are you sorry that Netflix has cancelled this TV series, instead?

Love this show so much I really hope they renew it!

I am so mad at Netflix for canceling Disjointed. They had even picked and assembled a fantastic array of Talent, starting of course with the Queen, Kathy Bates. I even love Maria’s character. This is what happens when the beureaucratic bulls-*** balls march over all our rights once again! I hope all the mergers and acquisitions get mindfu****, and blown into space like complete dissaray on our 300 million dollar takeovers. I love my AHS but I love to laugh more!

The show is awesome!! Despite being apparently innocent it goes beyond exploring and exposing interesting traits of human behaviour, which you can go back to later, when you are done laughing. I’d love for Netflix to release more seasons!!!

I just watched this whole season in one day I loved it! This show is so funny I really hope that they renew the show for a second season.

Love love love this show can’t wait for more ..not a pot smoker but I can vibe with this show it’s funny

Love the show. Shows all aspects of all the people. funny and sad- great writing.

Fabulous new comedy but can the laugh track!!

Love the show! Definitely needs a second, third, fourth, etc. Do Not Cancel!!

This is a HiGh-ilaRioUs show !!!!
PLEASE DO NOT CANCEL !!!
It’s actually refreshing in a Heavy Metal sort of way !! Lol lol !

Great show. So funny. I love it. Please don’t cancel it.

Please keep this show ! I love the the sense of humor from each character. The charisma from everyone is outstanding and they all click on a certain level with one another. Don’t cancel !

I have never laughed so much and so hard. In a time when everything is so stressful and unsettled it’s nice to know there is still an escape and that’s your show. Please don’t cancel this show America needs to laugh and you have done a great job helping people do just that.

I love this show it is hilarious and I love the cast. I’m telling everyone I know about it and the feed back from them is that the love it. So cool. Please keep it coming back. Thank you

AS THE FOUNDER OF THE DOPE SMOKER UNION AT HOWARD UNIVERSITY IN 1975, I THINK THAT IT IS HIGH TIMES THAT AMERICA GETS REAL ABOUT SMOKING WEED.

I thoroughly enjoyed this show. At first, I thought some of the jokes just a bit too much, but as I watched more, they seemed to be a bit less juvenile and, sexually in poor taste. I am not much of a pot smoker, but it did make me feel like it would be fun to be a stoner. Lots of good laughs. I hope there is another season.