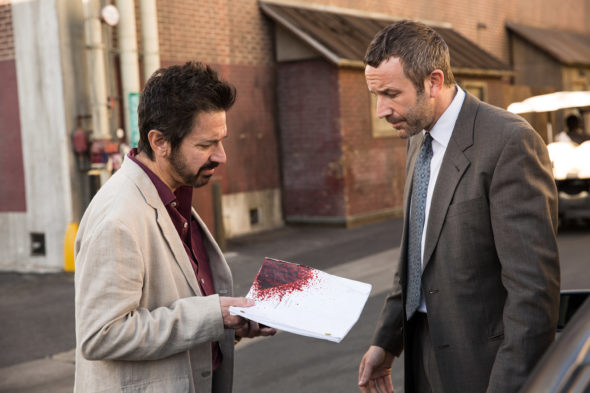 It’s the middle of summer, but EPIX is ready for autumn. The network just announced the premiere dates for their new and returning TV shows for fall 2019.

GET SHORTY, SEASON 3
Premieres Sunday, October 6 at 10PM
The dark comedy from MGM Television, based in part on the 1990s bestselling Elmore Leonard novel of the same name and created for television by Davey Holmes (Shameless), will return this fall with seven all-new episodes. Season 3 will see Miles Daly, newly released from prison, in a cat and mouse game with studio head Laurence Budd, while Amara and Rick flee to the Guatemalan jungle to escape the FBI.

SLOW BURN
Premieres Sunday, November 24 at 10PM
Slow Burn is a six-episode docuseries based on the Slate podcast of the same name. From Nixon and Watergate to Clinton’s impeachment, host Leon Neyfakh excavates the strange subplots and forgotten characters involved in the downfall of a president — flashing back to politically tumultuous times not so far removed from today. Slow Burn, winner of Best Podcast at the first iHeartRadio Podcast Awards, is produced by Slate. The docuseries will be produced in partnership between Left/Right, a Red Arrow Studios company, and Slate.

ALIVE
Premieres Monday, November 9 at 9PM
At the height of the conflicts in Iraq and Afghanistan, an unprecedented number of injured American soldiers began returning home and looking for ways to cope with their new realities.

Alive follows the journeys of a number of veterans who turn to adaptive athletics to help them heal both physically and emotionally from their battle wounds. Alive is directed by Stephanie Soechtig and produced by Kristin Lazure and Stephanie Soechitg for Atlas Films.

LAUREL CANYON
Airs over two nights: Monday, December 16 at 9PM and Monday, December 23 at 9PM
Laurel Canyon is a feature-length, two-part documentary that pulls back the curtain on a mythical world and provides an up-close look at the lives of the musicians who inhabited it.

Through a wealth of rare and newly unearthed footage and audio recordings, the documentary features an intimate portrait of the artists who created a musical revolution that changed popular culture. Uniquely immersive and experiential, this four-hour event takes us back in time to a place where a rustic canyon in the heart of Los Angeles became a musical petri dish.

Directed by Alison Ellwood (History of the Eagles), the documentary celebrates the music of Joni Mitchell, Jackson Browne, Linda Ronstadt, The Eagles, The Mamas and The Papas, Carole King, Crosby, Stills, Nash and Young, James Taylor, The Doors, Frank Zappa and more.

What do you think? Do you watch EPIX? Which TV shows will you watch this fall?