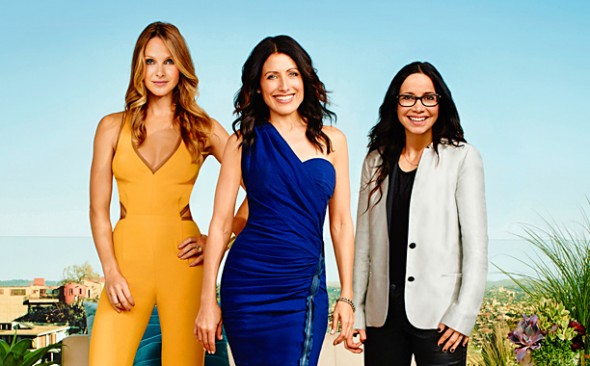 TV show description:
Inspired by the Girlfriends’ Guide book series by Vicki Iovine, this scripted series follows Abby McCarthy (Lisa Edelstein), a self-help book author and guru of all things family. She shocks the world when she reveals that her seemingly perfect life has all been a lie.

After publicly admitting that she has separated from her husband, Jake (Paul Adelstein), America’s once-favorite girlfriend finds her career and marriage in a free fall. As she starts to navigate life as a single woman in her 40s, Abby turns to her new divorced friends (rather than her married ones) for advice.

Her friend Lyla (Janeane Garofalo) is a legendary no-nonsense entertainment lawyer who is in a constant “War of the Roses” battle with her ex-husband. Phoebe (Beau Garrett) is a former model and budding entrepreneur who has a very unique relationship with her ex.

When Abby hires Delia (Necar Zadegan) as her divorce attorney, Abby’s brother Max (Patrick Heusinger), who fought hard for the right to marry, questions his sister on how she can so easily decide to walk away from her own marriage.

Abby is on a journey of self-discovery as she attempts to salvage her career, get back in the dating game and figure out her new identity as a single woman. As she hits the reset button on her life, she embarks on startling adventures and mishaps along the way. They include her first post-marriage hook-up, a blog post gone horribly wrong, and a Vegas trip that leads to some unexpected complications.

Series Finale:
Episode #45 — Rule No. 1: Keep the Toast Short
With her daughter headed off to college and Barbara moving to New York to pursue new opportunities, Abby must face the future and all its unknowns. Will she get her “happily ever after”?
First aired: July 19, 2018.

What do you think? Do you like the Girlfriends’ Guide to Divorce TV show? Do you think it should have ended or been brought back for season six?

Love this show! Really accurate in many areas, especially when divorcing someone who is a good person, just not a good person for you. I laugh and I cry everytime I watch this show.

I am in my early 20’s and my friends and I found this on a whim and fell in love!!! We get together once a week to watch the show, it has been everyone’s favorite hands down we are so sad it is coming to an end 🙁 we were all hoping it would go on at least a few more seasons.

Watch the show religiously. The premise was believable & well written. Very easy to get involved with the characters & relate to them. Hope this show doesn’t get cancelled. I certainly can be considered a fan.

Really disappointed to get this latest update of show being cancelled. Looked forward to this show. An adult show which didn’t have a lot of foul language but great adult moments done well. My message will not change your decision but hopefully more who don’t want to see this taken off….Now reply. The actors were matched together perfectly too.

Fantastic show. So glad is getting a second season. Abby and Will are the perfect tv romantic couple and i need to see more of them.

This is such a great adult show that is entertaining ,smart and witty. I truly look forward to watching this show. I record it so I can catch all the lines….it’s a show that is modern and we’ll written! Please keep writing great material.

Amazing show. So glad is getting a second season. I can´t wait for it. Lisa Edelstein is amazing in this.

It was the season finale. The show’s been renewed for a second season.

Love this show!!!!! Taped the series…..at first the show was pretty good… But as the story line progressed and they replaced garafalos character…..it REALLY GOT GREAT!!!!
Keep it going can’t wait to see more!!!

totally agree. Can’t think of her name right now, but the friend that lives with Abby is absolutely great. She is such a great addition to the show.

This is a pathetic rip off from the original 2012 Cinemax series “Girls Guide to Depravity”. The only differences are the ages of the characters and rating.
If you don’t believe me, go on Demand and see for yourself. I’m sure you will enjoy the steamy “Original” much more than the semi warm carbon copy.

I missed the last episode. Didn’t catch on that part.