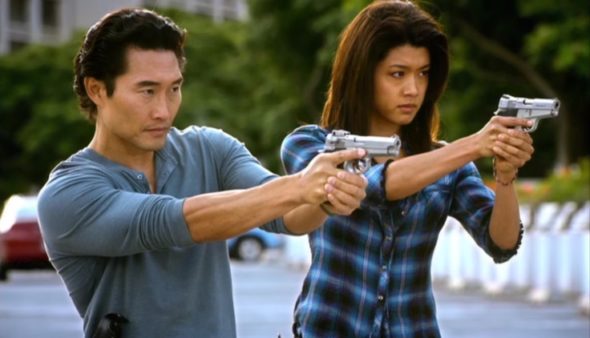 Kim is likely leaving to executive produce his new drama on ABC, The Good Doctor. It’s unclear why Park is departing Hawaii Five-0, but CBS did release a statement thanking the actors. Season eight of Hawaii Five-0 is set to premiere on September 29th at 9 p.m. ET/PT.

We are so appreciative of Daniel and Grace’s enormous talents, professional excellence and the aloha spirit they brought to each and every one of our 168 episodes. They’ve helped us build an exciting new Hawaii Five-0, and we wish them all the best and much success in their next chapters. Mahalo and a hui hou…”

What do you think? Do you watch Hawaii Five-0? Will you watch season eight without Kim and Park?

I love this program how will they continue without these two will miss them very much.

I will continue to watch, because I like the show, but I will miss both of them.

how in the world are those characters supposed to get written off/out of the storyline w/ any real ease?! well, I for one am def not expecting the show to be the same anymore without either one of them & it really has been one of my favorite shows! the, I cannot help but to wonder what that will mean for kono’s hubby and chin’s niece’s characters as well…hmm. Im sorry I gotta say this very disappointing news 🙁

Kono was already written off in the season finale.

I will still watch but will miss both of them.

I will continue to watch because I think they will be back for Season 9. I will miss both of them. Park’s husband is starring in “Salvation” on CBS beginning July 12th. It won’t be the same, but here’s hoping it will still draw the audience it needs to stay on TV.

Masi Oka (aka Max) has already left during season 7.

While Daniel Dae Kim’s decision to leave might have been helped along by the fact he is going to be the executive producer on another show, it was apparently not the main reason.

It has been reported that both Kim and Grace Park are both leaving after failing to get equal pay with the likes of Alex O’Loughlin and Scott Cann.

Too bad that these two actors are leaving. I think that the entire cast is perfect.
I’ll really miss them. Will they have replacements or will the 5-0 team carry on with out the missing two characters.

I love Hawaii FiveO. Will miss Kono and Chin; but will definitely still watch

It’s going to be strange not having them there

It will not be the same without them. I will try it, but just not sure one can replace perfection…..

Sorry you old people live that era but new generation love it and many more seasons to come like original show was in time era.

OMG I can’t believe their leaving the show.
It’s like part of the family won’t be there on Friday’s. I’m saddened

This reboot has never been that good, so I don’t really care what they do with it. Cancel it and come up with a better show for the time slot would be my advice.

Soooo………a tv show based in Hawaii has lost all of the cast members of Asian descent? Masi Oka left last season and if Kono is leaving, I doubt Ian Anthony Dale will remain.

Who cares? The show sucks. Better for these actors to move on.