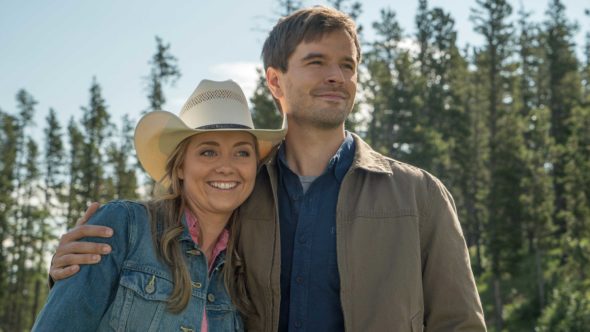 Season 12 of Heartland premieres on UP on October 2nd at 9 p.m. ET/PT. And what about season 13? CBC has already ordered a 13th season of the TV show, but it’s unclear at the moment if UPtv will air the season in the U.S.

Take a sneak peek at season 12 below:

What do you think? Are you a fan of Heartland? Are you excited for the new season?

I love your tv show transport me to my childhood in the farm of my grandparents in Guatemala, yesterday finished the season 13 desperate to know if more seasons are coming.
Currently living in Minneapolis Minnesota
CONGRATULATIONS for your success you did a great job
Curious to know Canada one day

I LOVE HEARTLAND! I’m in
California, everyone I know watches and loves it! Will the new seasons be on Netflix in
The USA?

Just stumbled on to show two months ago I have watched all 11 seasons and started over .I am totally addicted ,please do not stop making this show .

Please keep making more episodes of Heartland.
It’s by far my favorite program. I’ve been watching
all the old episodes over again since this Covid19
started. I just never get tired of it. It’s a very nice
family oriented clean show.

Heartland brings back many fond memories when I left a high paying office job in Houston, moved to a small village in Colorado to work on a dude ranch handling horses during the day and working at a local diner in the evenings. I can relate to most of the characters on the show. Like Lu, I left the city, took an extreme cut in pay to live a slower pace of life, enjoy fresh air, majestic mountains, and the opportunity to work with horses. Like Amy & Georgie, as a teenager, I was trained to ride English style and… Read more »