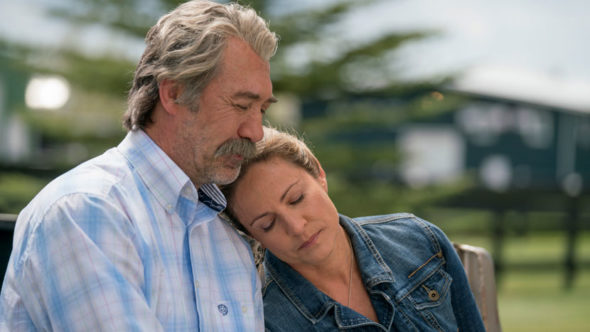 Can the Fleming family continue to triumph over adversity? Has the Heartland TV show been cancelled or renewed for a 13th season on UPtv? The television vulture is watching all the latest cancellation and renewal news, so this page is the place to track the status of Heartland, season 13. Bookmark it, or subscribe for the latest updates. Remember, the television vulture is watching your shows. Are you?

Airing on the UPtv cable channel, the Heartland TV show stars Amber Marshall, Graham Wardle, Michelle Morgan, Shaun Johnston, Alisha Newton, Chris Potter, and Jessica Steen. The series is a multi-generational saga that’s set on the Heartland ranch in the rolling foothills of Alberta, Canada. It follows Amy Fleming (Marshall), her older sister Lou (Morgan), and their Grandfather Jack (Johnston). Together, they confront the challenges of running the ranch that has been in their family for generations. Heartland is unlike other horse ranches in that those who work there undertake the mission of treating troubled or neglected horses and finding them new homes. Amy has inherited her late mother’s uncanny ability to work with, understand, and help heal those horses. The family has been through tough times and their ability to stick together has helped them pull through life’s thick and thin moments.

We already know that Heartland has been renewed for a 13th season on CBC in Canada. The season 13 episodes have been produced and began running in Canada 1n September 2019. The question for viewers in the United States is whether UPtv will also air season 13. Though UP doesn’t typically announce their intentions, my hungry gut tells me that the channel will continue to air it, especially since the show is also offered via the UP faith & family streaming channel (typically before the episodes are broadcast on the cable channel). I’ll update this page with breaking developments. Subscribe for free alerts on Heartland cancellation or renewal news.

What do you think? Are you glad that the Heartland TV show has been renewed for a 13th season on UP tv? How would you feel if UP tv had decided not to air this TV series, instead?

Heartland, up to Season 13, is on HULU for the rest of us who do not live in Canada. This wonderful show has gotten me through a very rough patch in my life. It is one of the most absorbing shows and the most decent shows I have seen in my life, similar to many British and Australian shows. The USA seems incapable or intolerant of shows with little swearing, drinking or smoking in them. I love this show and just downloaded the UP app to watch Season 14. Many thank to the producers and cast for making the Flemings… Read more »

I watch it and I watch all the reruns love it!

I have been waiting for the new season of Heartland. When will I be able to view it on Netflix?

I loved watching Heartland so much. It gave us a place to feel our emotions as well as enjoy Amys successes in horse training and her personal life. Lou is my favorite character. She fiercely attacks any threat to her family. Jack reminds me of my father, who passed away on the first year, 2017, we welcomed Heartland into our broken hearts. I fell in love with Tim and Im 70 this month. Thank you for renewing it. Light TV showed it on channel 7. We re missing you all!

Why can’t I get heartland to play on up tv. I have watched it before for seasons 12 and 13. But for some reason it won’t play now.

We love the heartland tv shows.

We Love watching the Heartland movie, they are professional yet down to Earth, and respectful. We view them nightly. When are they returning to the and what CST. They’re Our Family Favorites.
Mr. & Mrs. Garrick& Family.

Please keep showing Heartland on UP. Love this series

Love this show, please don’t stop showing it on Up
channel.

please renew… we love it