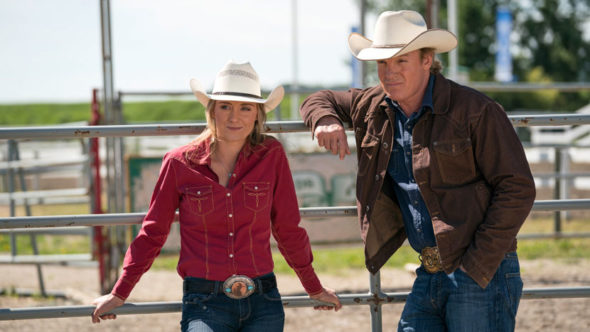 Will the ranch stay open in the 12th season of the Heartland TV show on UPtv? As we all know, the Nielsen ratings typically play a big role in determining whether a TV show like Heartland is cancelled or renewed for season 13. Unfortunately, most of us do not live in Nielsen households. Because many viewers feel frustration when their viewing habits and opinions aren’t considered, we invite you to rate all of the 12th season episodes of Heartland here.

Airing on the UPtv cable channel in the United States, the Heartland TV show stars Amber Marshall, Graham Wardle, Michelle Morgan, Shaun Johnston, Alisha Newton, Chris Potter, and Jessica Steen. The series is a multi-generational saga that’s set on the Heartland ranch in the rolling foothills of Alberta, Canada. It follows Amy Fleming (Marshall), her older sister Lou (Morgan), and their Grandfather Jack (Johnston). Together, they confront the challenges of running the ranch that has been in their family for generations. Heartland is unlike other horse ranches in that those who work there undertake the mission of treating troubled or neglected horses and finding them new homes. Amy has inherited her late mother’s uncanny ability to work with, understand, and help heal those horses. The family has been through tough times and their ability to stick together has helped them pull through life’s thick and thin moments.

What do you think? Which season 12 episodes of the Heartland TV series do you rate as wonderful, terrible, or somewhere between? Do you think that UPtv should air season 13 of Heartland? Don’t forget to vote, and share your thoughts, below.

I love this show and it would not be the same without all the original characters. We all feel like we know them personally after watching them doe 13 seasons. Especially Amy and TY.They can never change or leave.

BEST TV SERIES EVER…. Amy and l are besties. Georgie has really grown up. Luke is a great kid. I hope he gets to stay w Amy & Ty. This is teally a wonderful prpgram. No sex scenes, which l love as a CHRISTIAN
Please keep HEARTLAND GOING

My husband and I have been quarantined for over a month due to covid19. We started watching this at the beginning of our quarantine and we look forward to watching this every night. These actors and actresses are awesome. I feel as though I know them personally, I even dream about the horses. This is such a warm and real family situations that most people can relate to. Please give us more seasons. I can’t wait to see what’s next. This is my favorite show of all times. I want to come to Heartland and meet my other family.

Please, please keep this warm and wonderful show going. It’s only one of very few series I look forward to watching. This family feels so real and I really feel like the story lines could, hopefully, go on forever. I will keep my fingers crossed…