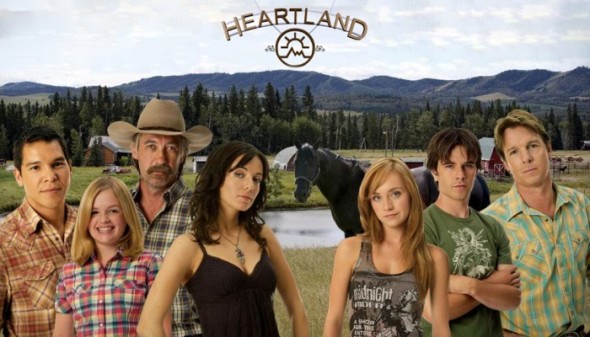 The Canadian drama follows a young woman who has a natural gift with horses. The cast also includes Amber Marshall, Chris Potter, and Shaun Johnston. CBC (the show’s Canadian network) has already renewed the series for a 10th season.

Season nine of Heartland debuts on UP on September 7th.

What do you think? Are you a fan of Heartland? Are you excited it will return to UP?

Its hard to wait! But great things are worth waiting for. Thanks for listening.

So happy to hear UP is broadcasting season 9. This is the best show on TV today. Thank you.

I am soooo THRILLED to have it back

I can not even express how very excited I am that HEARTLAND is coming back to UP. Thank you UP for bringing back the absolute best show on TV. I have missed it so much. I know you have me and thousands of HEARTLAND FANS VERY HAPPY. THANK YOU. THANK YOU, THANK YOU SOOOOOO MUCH!!!!

So few excellent family shows on with good morals these days. I, for one, am thankful Heartland will be back.

I love heartland, best family show out there on T.V. the only thing is I live in the United State’s, and could not fine it on here, anymore, so I bought all the DVD ‘s so I could watch the show, can you tell me what channel I can watch heartland on in the USA

Love this show can’t wait to see it again

No I am not happy watch it with my mom on channel cbc or cbs what channel they alway air it on . Will it till be on regular channel

I am so elated that you have chosen to bring Heartland back to your network!! I will for sure be tuning in on September seventh to watch season nine!! THANK YOU SO MUCH!!

This has to be the best family show they have on TV!! We haven’t missed an episode yet!!!

We are so excited we have been telling our friends for years it’s our favorite show, THANK YOU❤️ Living in Colorado we love our horses.

I’m beyond thrilled that Heartland will once again air on UP. I complained long and loud to UP as did so many others and am so happy they listened. I actually was in the process of changing my cable package to get rid of UP because they cancelled UP!

When will season 9 be on UP On Demand

I agree that it is one of the best shows on TV. I get it on Netflix and they left off on the end of Season 6. I think Netflix is starting season 7 in September also. I have learned so much about horses and their care by watching the show. I have watched 1-6 at least 5 times Can’t wait❣❣❣

I am so happy to hear this!!