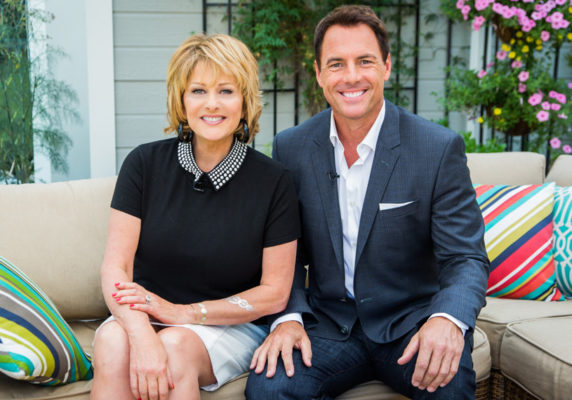 There is some drama brewing over at Home & Family. After being fired from the Hallmark Channel daytime show, Cristina Ferrare is now defending her replacement host Debbie Matenopoulos.

The news of Ferrare’s exit came seemingly out of nowhere earlier this month. Alongside Mark Steines, she had been co-host of the current program since 2012.

Since the news broke, many have criticized Hallmark Channel for hiring Matenopoulos only because she’s younger than Ferrare. Earlier this week, Maria Shriver said she was “ticked off” that the network fired Ferrare because she was “too old.” While this hasn’t been confirmed, Ferrare did recently post a picture of herself and Matenopoulos, saying she cares about the new co-host and the decision was only business.

Take a look at Maria Shriver’s video and Ferrare’s post below:

What do you think? Do you think Hallmark fired Ferrare for being “too old”? Do you like Debbie Matenopoulos as the new co-host?

Hallmark blew it. You’ve lost another viewer of all programming and I will no longer set foot in a hallmark store!

Finally! I can now post. Yes, I fully believed they let her go because of her age for a younger host, she has more or less said so. I do not like Debbie as the new host. She is too giddy , touchy feely, too spastic and cries too much. She lacks the class of Cristina. H&F has lost a lot of faithful, long time viewers with this catastrophic move.
Funny how the only statement H&F has made about this on their fb page is reposting Cristina ‘ s statement.

Hallmark appeals to an older audience often. I have never been a big watcher of home & family bur will NEVER watch it again. Tired of age discrimination. Aldo, Debbie may b lovely person but I can’t stand to watch her. Didn’t like on the view either.

I absolutely believe Cristina was fired because of her age. Home and Family lied about it for 3 weeks and would not respond to viewers inquiries of Cristina’s whereabouts. The home and family has disintegrated with Cristina’s departure and so has the loyalty of its many faithful followers.

Go to Home and Family Save The Family Facebook page to see really what’s going on. There was a LA Newscast TV segment on this very subject. Disgraceful! Fired due to age.

I think Hallmark made a mistake. Cristina was the heart of that show.

Exactly!!! Look at the backlash!

I have watched HOME AND FAMILY since the original show in the 90’s. I think Cristina truly became the mother of the group. We as a society have lost that family dependence on grandma or the wise old aunt as a “go-to” for help in life matters, so i loved HOME AND FAMILY having Cristina in that type of role. She gave tips on cooking, appearance, wardrobe, how to be a good mom, and was a grear example of how to be relevant as you age. Letting her go for being too old, or whatever other reason ( which apparently… Read more »

I am very disappointed in how poorly Cristina was treated. The fact that she has come to Debbie’s defense shows what a gracious woman Cristina is.
I have lost all respect for the show and the network. I have stopped watching the show and both Hallmark channels. I will no longer purchase any Hallmark products.

I have been watching the show since it began and was so happy they chose Cristina Ferrare to be the new host when Paige left. She fit the role so harmoniously and made the show feel like a loving home with a family. Over the years, they have brought in different people, “family members”, to whom she has been kind and gracious. I appreciated what they brought to the show as well, but she set the standard. Regular viewers invested 2 hours a day (some 4 to see the previous days repeat episode!), 5 days a week, of their time… Read more »

Excellent comments, Petrina!!! I so agree with you!

Cristina was fired for being “too old” plain and simple. Her H&F “family” lied and said that she was on vacation for 3 weeks. Loyal viewers are outraged and rightly so. Ageism is horrific!! Not one more minute of my time will be wasted watching a bunch of liars….. I don’t care if it was “the suits” who made the decision, Cristina was kicked to the curb and wasn’t given so much as a chance to say goodbye to her loyal fan base…. I sincerely doubt that Maria Shriver would lie…. Especially with Cristina standing right next to her….. There,… Read more »

Cannot STAND Debbie Matenopoulos..Never could…..Barbara Walters dumped her with GOOD reason. WHY can’t Home and Family learn from the BEST? Barbara had a good reason and Home and Family will be sorry that they ousted Cristina for her!

I have been a viewer for ever. Although I have always loved, Christina I felt that she was looking a little tired and she felt it was her time to enjoy life with her family. I also Don’t feel that hallmark fired her or ithat it had anything to do with her age. I just think she wasn’t having fun anymore. It’s still okay for people to retire. Now about Debbie I love her she is, of course has her own personality and she is just delightful, funny, smart and kind to all. I will be watching forever. Martha

It was confirmed by Maria Shriver with Cristina standing right next to her that she was let go for “being too old”. Nothing against Debbie but that is not how you treat “family”, it’s called age discrimination.

Looking a little tired?? She didn’t retire, she was let go. She came to Debbie s defense by request but never once said she left on her own accord. Did you watch the video? Did you see her contradict anything Maria said?

I think Debbie was given a fair chance during the two weeks we were told that Cristina was on “vacation”. In my opinion, Hallmark never intended to tell viewers right away that Cristina was not returning in the hopes that we would just get used to Debbie as the new cohost. They must be somewhat shocked by the negative reaction they have received from so many of us who were regular viewers. When I first found the show, I immediately loved it and that will never happen with Debbie at the helm no matter how many times I watch it… Read more »

You expressed my opinion.

I totally agree with your comments, Rosemarie. Well said!!!

I thought Hallmark fired her because of her age, as many did before Maria Shriver confirmed it. We were all happy to hear her tell the truth and defend her friend. Obviously Cristina is a classy lady to defend Debbie. Debbie along with Home and Family are getting a lot of flack from the fans of the show. The Network deserves it for age discrimination and lying to the fans for weeks. Debbie does not deserve blame however many fans are upset that all the family members have been mum regarding the unjust firing of Cristina. Cristina made the show… Read more »

I agree 100%. I was just going to write something very similar.
I will no longer watch Home & Family. The whole show just leaves you
with an awful taste in your mouth now. Very insincere.

Any negative comments on Home and Family Facebook page are automatically deleted and the poster is blocked! And, believe me, there has been numerous ones. Hardly any of the remaining cast has voiced their support for Cristina because they have been threatened. I have lost all respect for Hallmark!

Sorry to have to post on others, but for some reason my page is missing where I can post and I can only reply. That said: I agree with you 100%. Cristina was gracious to come to Debbie ‘ s defense at their request but in that defense she never said “I left on my own accord”. Her fb posts before the defense of Debbie tells everyone that. And she didn’t deny Maria ‘ s statement so how can these people think she was tired and retired??

Cristina was the heart of the show. I always fast forwarded through Debbie’s segments. Now I can’t even watch the show anymore. Huge disappointment. This show won’t last with Debbie as cohost.

The show will NOT last with Cristina off and Debbie on. She is not right for the show..never has been and I have written to the writers of the show before about my feelings about Debbie. She seems VERY self absorbed. Not anything like Cristina

So did I on the fast forwarding and I no longer watch anymore. Too much Debbie in one day.

Nor do I. I cannot understand how anyone can question her removal after seeing her stand there while Maria told everyone the truth!