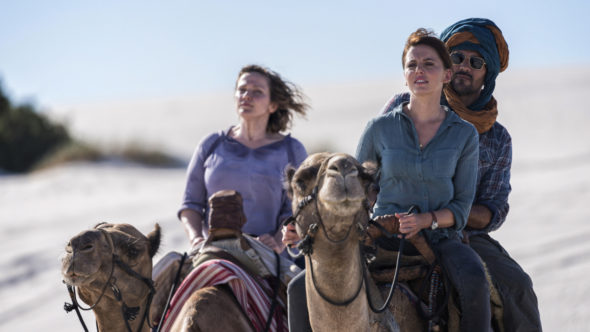 fun and enjoyable show. Good chemistry between the actors Too bad it was cancelled

This is one of the best shows around. We love it. The kids love it. It shouldn’t be cancelled.

I really enjoyed this TV show. As an up comming profesional anthropologist/ archeologists this show reminded me what first got me onto my field. The adventure, the knowledge, the folk tales and potential bad guys, given the fact that the characters dont approach it in the most professional way, it was till fun to watch. All this was mixed in with the over the top entertainment. I hope that the network reconsider the cancellation.

Dang it. I love this show. Its funny, adventurous and not very serious. I love the lightheartedness of it. Maybe itll get picked up by another station, hopefully.

Please bring it back it’s a really great show. Loved the plot so far. Great to watch with family too.

I loved this show I’m gutted

Send an email to the cw to get Hooten and the Lady back!

Nooooo! I am loving this show. It can’t be cancelled! 🙁

Aww no! Don’t cancel it Sky, at least make a second season, the first was so good! Very disappointed, loved this show

Really thought this series was going to make it, it’s really disappointing that so early into the season a negative decision has been made.

Love this show! I HATE that it’s cancelled!

Was a really cute and fun show. Campy, but was good. Will miss it. But of course they keep other stupid shows on. Don’t get it.

I just found this series on CW and I am totally enjoying it. So sorry to see it is cancelled.

Not on the CW here. It was available on a PBS station

Hmm, cancelled by England’s Sky network. Show was sluggish in the Thurs. time slot, moved to Mon. After two weeks it showed a 12% increase. It’s numbers put it in the lower third of CW’s prime programs, some of which are renewed. This is a summer only show and most likely was cheap to plug in(no production cost). So could the CW pick this up and go with it?! This is a fun show with a mix of all genres. Cast is good, story line too. Yes, it looks pretty bleak, though one can still hope.