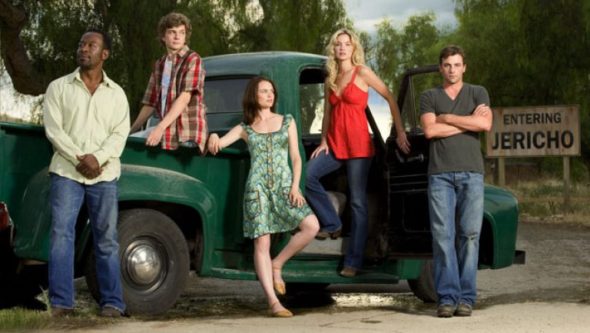 Jericho was a great series that shouldn’t have been cancelled. I watched again on Netflix and enjoyed it. Unfortunately, once again I was immensely disappointed that season 2, episode 7 was an incomplete ending to the show. The end of this episode opened the story for even more episodes I would happily watch.
CBS please do the right thing this time and allow Netflix to make season 3, and many more episodes.

I agree with you , such a great show should of never been cancelled. Even if they continued it & just put it on DVD I would gladly buy it. I hope CBS See’s & reads all of the comments.

Jerico was a captivating tv series and would be a very big hit today with this crisis from moment to moment occuring…very believable. One scene that sticks out in my mind was when the blind gal(can’t remember her name) took that gun and wasted her intruders using only her sense of hearing…didn’t end well for her but wow, she was dynamite. Thanks you guys for all of the entertainment…think about bringi it back

I wish excellent shows like this weren’t cancelled. I will support any effort to bring it back and continue the series.

Please bring back Jericho! No doubt it would again be a big hit!

I would even subscribe to Netflix to watch this show. I was pissed when it got cancelled, both times.

Loved the series. Just watched for first time and am watching it again on netflix. Was really sorry to find out it was cancelled.

I have watched this show three or four times and I still want more. I really wish they would renew the series hell if I know the actors would be willing I’m sure a Kickstarter project would fund the show. I want to see how Dale helps the revolution along with Beck and seeings how he will help fight his former employers.

Just re watched it on Netflix. Bring it back and I will definitely watch

Yes! Bring it back! We watched and loved the entire TV series and are anxious for more!

Just discovered this show on Netflix! PLEASE bring it back! Best show ever!!

Hell yes. I watched it when it first premiered. What’s funny is I’m watching season 1 episode 12 right now. I was very disappointed when hit ended after only two seasons. Most of the shows on these days aren’t very entertaining to me. Thank you for Netflix. I’m all for it

…It would be awesome to restart Jericho as a Netflix series!

I was soooo bummed when I learned that the episode of Jericho I just watched was the finale! I mean, it was fantastic, but I had no idea it was the last episode and want more!!