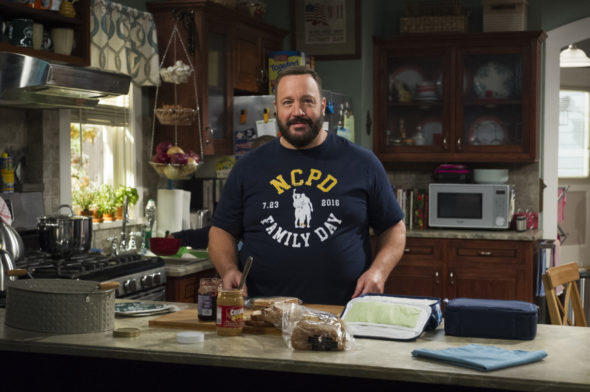 Can Kevin Gable make it without Donna? Has the Kevin Can Wait TV show been cancelled or renewed for a third season? The television vulture is watching the latest cancellation and renewal news so this page is the place to track the status of Kevin Can Wait, season three. Bookmark it, or subscribe for the latest updates. Remember, the television vulture is watching your shows. Are you?

Airing on the CBS television network, Kevin Can Wait stars Kevin James, Taylor Spreitler, Ryan Cartwright, Mary-Charles Joes, James DiGiacomo, Gary Valentine, Leonard Earl Howze, and Leah Remini. The sitcom centers on Kevin Gable (James). In the first season, this former police officer yearned to revel in his retirement. The second installment opens a year after the events of the season one finale. Now, in the wake of his wife Donna’s (Erinn Hayes) death, Kevin finds himself working for his old rival, Vanessa (Remini), at her security firm.

The second season of Kevin Can Wait is averaging a 1.18 rating in the 18-49 demographic and 6.37 million viewers. Compared to season one, that’s down by 27% in the demo and down by 17% in viewership. Find out how Kevin Can Wait stacks up against other CBS TV shows.

Will CBS cancel or renew Kevin Can Wait for a third season? Season two started with very good ratings, but they quickly dropped after the premiere. However, this sitcom has remained fairly strong since then. It remains one of the network’s best-rated comedies so I think that it will be renewed for a third season. I’ll keep an eye on the ratings and will update this page from time to time. Subscribe for free updates on any Kevin Can Wait cancellation or renewal news.

5/12/2018 Status Update: Kevin Can Wait has been cancelled by CBS. Details here.


What do you think? Should the Kevin Can Wait TV series be cancelled or renewed for season three? Did CBS make the right call, or the wrong one, when they replaced Hayes with Remini?

CANCEL I wasn’t a fan of King of Queens, so refuse to watch the attempt of a redo.

Cancel, nothing but a weird King of Queens follow-on. Should never have killed of Donna the only real talent in the show!

I love this show! The entire cast including Kevin and Leah are incredibly talented, great writing, and good chemistry. It is the best!

Please call time of death on this show. It’s an embarrassment to the King of Queens legacy…recycled plots and lame jokes.

I am really hoping that “Kevin Can Wait” will be renewed for a third season! I really enjoy the entire show and basically all the characters.

Cancel, if I want to see Leah I’d be watching king of queens

I am waiting hopefuly that the Kevin Can Wait show is renewed for a third season. I can only see this show getting better and better now. They have alot of funny characters on the show. Leah and Kevin work together perfectly and am happy that Leah came on the show. I watch one episode of Kevin Can Wait on season one and I just didn’t like it. But now I think it is a great show. Gary Valentine, Ryan Cartwright and Taylor Spieter. They are all good! And Ruger. he needs to be in every episode. He is very… Read more »

I think Ruker, the employee at Monkey Fist has great comedic timing. Very funny. I did not watch season one of Kevin Can Wait so I have nothing to compare it too.

I like the show very much! Kevin and Leah are great together and his children are very funny also. And Chase! It is like Kevin and Leah are together again but in a different kind of relationship. I think the characters really care for each other. I look every couple of days to see if the show has been renewed. I like the characters so much! Kevin and Vanessa are not Doug and Carrie. This is new and fresh! And it is nice to have Danny Valentine on the show. He is a riot! To just sit down in your… Read more »

Overall, it’s improved, and it was pretty good to begin with … lots of haters here. I wouldn’t bother to pan a show I don’t like, so why are people so hot to trash this one? I’m guessing they must have some sort of ulterior motive. Either that or no life. The show continues to grow and the supporting actors are stretching too. Gary Valentine is a hoot and, make no mistake about it, Kevin James is the glue … not the ex-wife. If he is more comfortable with Leah, so be it. This is a business like any other.… Read more »

If Kevin was a good actor ok. But he shouldn’t be telling the writers and directors who and who shouldn’t be on the show. He’s not that great of an actor on TV or movies. You can hear Kevin will be just another washed up actor try to be king. But he’s just a lonely peasant.

Oh, I didn’t know it was Kevin’s idea to drop his wife!!!
Not only is this a bad show but Kevin has no class at all!!!! I really enjoyed his wife and I think it’s a dirty thing to do!!!!!

Funnier with Leah. Donna wasn’t funny and no chemistry with Kevin. The kids aren’t very good though. It has improved in recent weeks, but the single father stuff isnt bringing rhe funny.