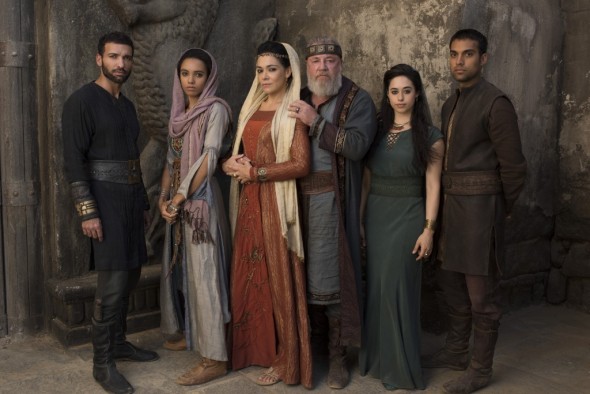 Say goodbye to Of Kings and Prophets. According to The Hollywood Reporter, ABC has cancelled the biblical drama after just two episodes.

The series stars Ray Winstone, Olly Rix, and Simone Kessell in stories based on the Biblical Books of Samuel.

The cancellation is not entirely unexpected. The series premiere drew low ratings, with only 3.3 million viewers, and the second episode declined even further with an average of about 2.4 million.

Additionally, the show has recently received ample criticism from the Parents Television Council for its violence and sexual explicitness.

According to The Hollywood Reporter, ABC will not air the remaining eight episodes. Instead, its time slot will be filled by the Shark Tank spin-off, Beyond the Tank.

What do you think? Did you watch Of Kings and Prophets? Are you surprised it was cancelled?

I should have known better than to watch a new ABC show, they start new ones every few weeks with no advertising of the shows to promote them then cancel after two airings. Then they air stupid silly crap in its place, usually a rerun. This makes no sense. I’ll stick with CBS, toodles ABC

I and my family are in total dismay that you would cancel this series! With all the crap you show on all these channels and you cancel this one. Shame on all of you who chose this one to be cancelled. Won’t be watching any of the other junk you show on ABC!!! CBS here I and many more come.

there are other shows that have all kinds of sexual and off the wall insults that I don’t carte for, but have not complained, put the kids to sleep or don’t let them watch. the historic value of this movie is good. let Netflix show the rest of the show

Well, I am really surprised this has been pulled. It’s been a very good production and there is a lot of history behind the storyline. Do you think there may be some “political correctness” involved?

Well, thanks alot, ABC! I really liked the show. It’s not like we have a shortage of reality shows. This really sucks! Can’t even finish out the season!!!

Bummer on the cancellation of this show. was all set to watch episode 3, and found out I was “SOL”.! So much for the “David & Goliath” battle.
Another interesting show, cancelled for the “No Brainer” reality shows.

I liked it. At least put it online or something so the people who do like it get a chance to see the ending.

Me to my wife on the day of the premier (as I was changing the channel to something we actually wanted to watch): “Hmmm… ‘Of Kings and Prophets’, huh? Judging by the ads I’ve seen, that show won’t last long…” I had no idea.

Are you kidding me. Its a well acted good show. Didnt even give it a chance. Put it back on…or at the very least air the remaining episodes.

anyone know where i can watch the rest of the 1st seasons remaining un-aired episodes?

I suspect ABC will stream them online at some point. We’ll do a story when/if they do.

thanks that would be appreciated 🙂

Wow, i finally found a show worth watching, and great acting too by the way, and now its cancelled! What!? i am confused and confounded, and my fear is that it pulled off the air due to anti-God sentiments and politics as usual from wealthy contributors or influences and connections rather than solely due to low ratings. Low ratings ay? give it some time – give it a chance to gain some momentum – like maybe is done with other shows?

I CANNOT believe they cancelled this after just 2 episodes!!!! ABC sucks when it comes to cancelling programs. The PTC are idiots!! Obviously they have not read the Bible. WHY do stations even listen to any groups. If they don’t like shows, don’t watch them, or block them. Why does everyone else have to suffer because of people like that. They are NOT my censors!!! This is awful.

If only the target audience — millennials — believed in God and the Bible, the series could have done well. Yesterday, on another site someone actually posted this comment: “Oh wow, the Biblical version of Game of Thrones.” How out of balance are that commenter’s sensibilities? And this thinking dictates what everyone will see on TV. Very, very sad.

I kind of wish they had left it on just to spite the PTC! I can’t stand that group–wish they would spend more time worrying about their own children than trying to police what everyone else watches. If they don’t want their kids to watch something, then don’t let them watch it! O get rid of your TV if you are that worried about your children seeing something they “shouldn’t”!

Yeah, I know the ratings were abysmal–I don’t really blame them for pulling it. I was just saying I wish they had kept it on just to annoy the PTC. Though, if a network starts airing a show, they should finish airing what’s been produced–it’s annoying that those who did enjoy it don’t get to see how it ends.

Maybe the parents need to block the program instead of trying to get it cancelled. No one’s being forced to watch.