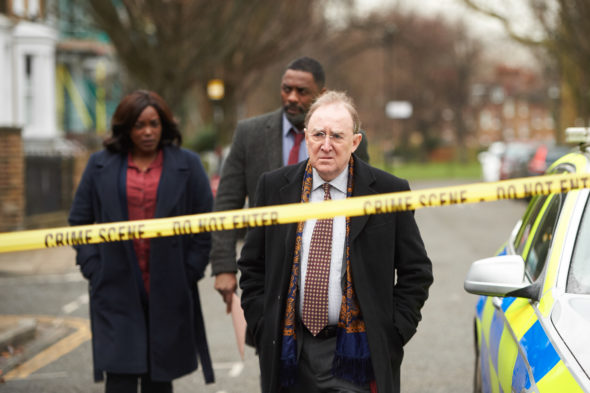 How well is John Luther getting the job done during the fifth season of the Luther TV show on BBC America? As we all know, the Nielsen ratings typically play a big role in determining whether a TV show like Luther is cancelled or renewed for season six. Unfortunately, most of us do not live in Nielsen households. Because many viewers feel frustration when their viewing habits and opinions aren’t considered, we’d like to offer you the chance to rate all of the Luther season five episodes here.

A BBC America British police drama, Luther season five stars Idris Elba, Ruth Wilson, Dermot Crowley, Michael Smiley, Patrick Malahide, Wunmi Mosaku, Enzo Cilenti, and Hermione Norris. In the fifth season, DCI John Luther (Elba) tackles another string of disturbing murders. He and new recruit D.S. Catherine Halliday (Mosaku) must unravel clues and separate fact from fiction to root out corruption. With the victims piling up and criminal George Cornelius (Malahide) turning up the heat, Luther must not only stop this killer but save himself, too.

What do you think? Which season five episodes of the Luther TV series do you rate as wonderful, terrible, or somewhere between? Should Luther be cancelled or renewed for a sixth season? Don’t forget to vote, and share your thoughts, below.

Yes, definitely, Luther needs to come back for season 6, season 7, season 8, and on and on. I love Luther. It’s a great show, great characters, a crazy, wonderful, grabbing you script, and a great cast. I look forward to season 6. Love Idris and all the cast. Would hate to see it go.

To have this most excellent, nonpareil really, show starring two of the world’s greatest actors, end on a cliffhanger for the fate of the lead characters and one more would be extremely untidy as well as unfair to the fans of Luther and to the integrity of the show as a whole. My opinion is that at least, it should go without saying, a season six is necessary as well as desirable.

I love Luther. It was one of my favorite series of all time. I live in New Orleans, Louisiana, and I hope that it will be continued and shown in the United States. Combination of Ruth Wilson and Idris Elba is dynamite!

Love ❤️ Luther
Can’t get enough of this show or Idris

Great gritty crime show. I love it. Please do renew for Season 6. Why do they always get rid of the best shows. Please keep this one.

I absolutely love this show! I’m missing it already knowing we have only 3 more epic left. Please do renew for season 6