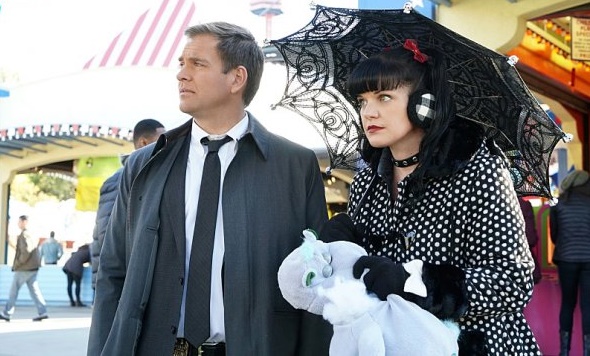 NCIS will return to CBS tonight with the second half of its 13th season, and there are reports that one of the members of the main cast will leave at the end of this season.

“We’re going to finish shooting this season at the end of April, and DiNozzo, played by Michael Weatherly, we’ve told people a long time ago, is leaving at the end of the season. So the writers have to decide what to do when one of the four members of the original cast leaves. When Michael leaves, there’ll just be three of us. I will go on doing Ducky for at least another year I believe, provided my health holds up. Things aren’t quite as easy at eighty two as they were at twenty eight! So I will go on as long as I can.”

NCIS is still the top series on network television. For season 13, the series has an average of 16.783 million viewers per episode. The series has successfully launched two spin-offs, and tonight’s return is a crossover with NCIS: New Orleans titled “Sister City.”

It is clear that NCIS is still a big hit for CBS, but does the fact that two main members of the cast are leaving the series this season and next mean that it is time for NCIS to come to an end? Could members of the cast move to one of the other NCIS series like CSI has done with Ted Danson and CSI: Cyber?

Check out a sneak peek from tonight’s crossover episode below. How long do you want NCIS to stay on the air? Tell us what you think.

Ziva and now Tony? We can not continue to listen as if nothing was.. This series has its own actors good at it.. As long at it that everyone leave.. This series will never be the same without them.. They are a gang, if Gibbs, Ducky and MC Gee longer leave no one will listen. We are still in shock for Ziva.. And every time I see I think this could be it.. It can not change the major players like that, it is because of them that we listen to this series.. If everyone leaves stop everything! It is… Read more »

I was disappointed when they didn’t bring back Ziva for a return visit.
If Michael leaves, it will be a loss,but hopefu;;y,there will be another character to complete the group.
I don’t know how much longer NCIS will be airing.
at least it’s a great show to watch.

I think something was lost when Ziva left & I don’t know if I’ll continue watching w/out Tony. At least let us see the two of them ride off into the sunset together.

Oh no! Not Tony! I think the show should still continue. I just hope they don’t kill off Tony so his character could return. Didn’t think I would survive Cote’s leaving, but got through it. Bishop is a good replacement. Tony would be hard to replace, but hopefully they can, or just keep him until the show actually ends, if he’s agreeable to that.

I hope not! I thought that’s why she came back? I loved she and Tony together, they have chemistry and are a good fit. I think we need some some personal stories to mix it up.

Even if Michael Weatherly is to leave just like when Cody de pablo left people that the show couldn’t make it, but when Bishop came in she came and strong and filled in the spot and the show is great and I know if Michael Weatherly is to leave and if the ducky leaves next season I know that Jimmy could fill in as Bishop has done a great job filling in for Cody de pablo and is doing a number 1 in my opinion and what are they bringing can fill in because NCIS is a great show and… Read more »

I think CSI Cyber is stupid and it does record on my DVR, but only because “The Good Wife” often runs late due to football and so i record the show after to make sure i get the whole Good Wife program. I watched a few times early on but was not a fan and they took off “Stalker” and replaced with that show and Stalker was way better in my opinion. Not a huge fan of the series in general but really dislike Cyber!

I hope they promote DiNozzo and not kill him off. If the actor can’t make it on his own then he can come back.

never understood why they can not keep the actors who s want to leave as regulars as part of a guest ones… may be they want o go and find another roles, but they could stay and appear two or three times a year… its unbelievable that none of them communicated with Ziva the current season after she leaved… they were coworkers and friends !!… but the options appeared to be YES or NO. Never understood why…

I want NCIS to go on for at five more years. Than end it on a high note. I do want to see any of the original characters leave at all. It makes me sad all the time. NCIS rules tuesdays nights on cbs.

I love the show and watch on USA almost daily. I’d hate to see any of the main characters leave, but I know everyone gets tired of the same routine. Whatever decision they make, it will work itself out. I’ll miss them all.

It would be sad to see Tony is leaving who was the back bone of the series after Gibbs. As for Ducky, I don’t Jimmy could replace him.

The NCIS chemistry was broken the second Cote left the show. It’s been painful to watch since then to say the least, but loyal I am! Now David & Michael too! The show’s had a great run. Hang up that gear, guys!

Jimmy could take over for Ducky, but I’m not too sure who could fill Tony’s spot.

I never knew Michael was leaving. So sad. Good for him I guess, but wish he would stay until the actual show ends so the original 4 remain from start to finish. He would be a great addition on one of the other NCIS spinoffs. Amy idea where he is going?