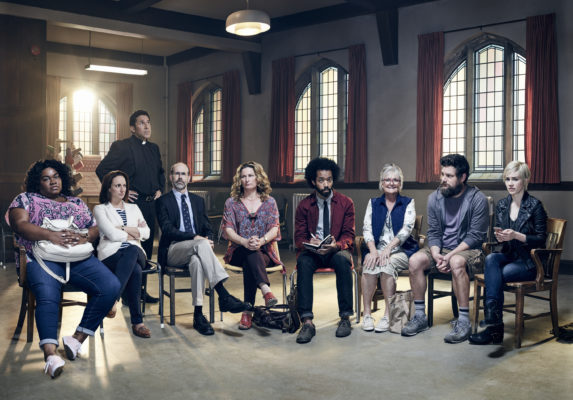 Network won’t take a chance on an original show, nor allow it to go on long enough to really catch on – they used to do this. But no more, which is a shame.

I loved the show. Premise was original and wonderfully wacky. I was so looking forward to season 3! Bring People of Earth back to us! Please!

Very disappointed I loved this show. So far there’s absolutely nothing at all worth watching on tv. They cancell anything that’s halfway good

This was such a great show! The off-beat production really added to the outstanding cast, writing and directing. First it’s renewed then two months before it’s supposed to air its canceled. TBS is sooo flaky. First it wants mainstream, then it wants edgy, then it cancels its best show… When someone can’t make up their mind they usually come up empty-handed.

The third season is already written, maybe another network will pick it up… Hope so.

canceling this show?!? Why? This is a really good well acted funny show. Cancel Samantha b instead

So sad this show is not coming back! Jeff is the best! One of the very few shows my teenage son and I enjoy together.

Do not cancel People of Earth. It is one of the funniest show on T.V. There are so many shows that should not be on. But this one needs to stay. Please don’t cancel.

Don’t cancel People of Earth please! We love the show and have been looking and watching for updates on premier date. so many of my friends love show too. This is shocking.

People of Earth was my can’t miss show. I haven’t enjoyed a show this much in years! Casting was fantastic, I was fond of each and every character. The plot was amusing and witty. There was just enough suspense to keep you wanting more. Please bring People of Earth back!

NOOOOOOOOO! I just found this show and it is hillarious. I just recommended it to a friend this morning, then I heard season 3 was cancelled. Someone has made a huge mistake!

When will People of Earth return? Can’t wait to see what happens!