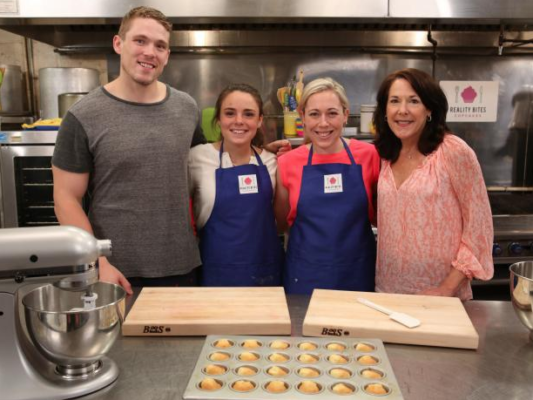 Are you a cupcake fan? Recently, Food Network announced their new TV show, Reality Cupcakes, will debut in August.

The baking series follows New York-based baker Ashley Foxen, who “is known for creating unique, unexpected cupcakes that resemble whatever her clients imagine.”

NEW YORK — July 10, 2018 – New York baker Ashley Foxen is known for creating unique, unexpected cupcakes that resemble whatever her clients imagine. Joined by her mom Denise, brother Alex and sister Lindsay, her up-and-coming business has become the go-to spot for bite-sized edible art that can fool even the most discerning eye. In the new series Reality Cupcakes, Food Network takes viewers behind-the-scenes as Ashley and her family create cupcakes that look like anything but cupcakes. The eight-episode series premieres Monday, August 6th with back-to-back episodes at 10pm (all times ET/PT) and 10:30pm.

“Ashley’s creativity has a unique twist – her cupcakes are so realistic that guests are in for a big surprise when they take a bite,” said Courtney White, General Manager and Executive Vice President, Programming, Food Network and HGTV. “That’s not a sushi roll, flower pot or T-bone steak – it’s a fully edible sweet creation that fools the senses!”

In the 10pm premiere episode, Ashley debuts her pastrami on rye cupcakes for a thrilled crowd at the 130th anniversary party for New York’s famous Katz’s Deli. Later, a super-chic succulent arrangement is created for sports personality Hannah Storm’s get-together and finally, the Foxen family delivers mouthwatering lamb chop cupcakes with a side of mint jelly to a backyard barbecue. Immediately following at 10:30pm, the crowds at Ripley’s Believe It or Not! are stunned by a magician’s trick using a shrunken head cupcake. Later, the gang brews up a latte made of cupcakes at a local coffee shop, complete with an edible cup and then a bachelorette party brunch toasts with Foxen-made margaritas and burrito cupcakes. Upcoming episodes feature a Shark Week-themed rooftop party with shark head cupcakes, peanut-butter and jelly school lunch cupcakes with edible milk cartons for a milestone performance of Broadway’s School of Rock and a special creation for Coney Island’s Mermaid Parade.

Head online to see the best of Ashley’s unique creations at FoodNetwork.com/RealityCupcakes and on Food Network’s Facebook and Instagram pages. Tell us which ones are your favorites using the hashtag #RealityCupcakes.”

What do you think? Do you watch a lot of baking shows? Will you check out Reality Cupcakes?