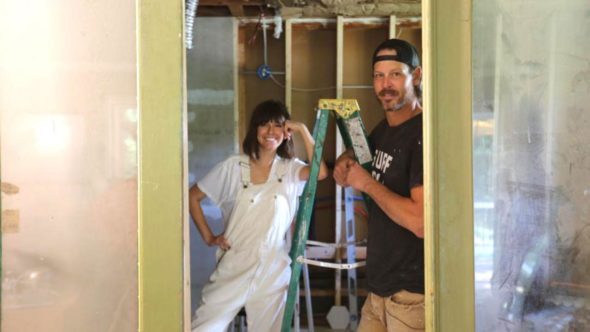 HGTV has some good news. Today, the network announced they’ve renewed Restored by the Fords and Home Town for new seasons.

NEW YORK [Feb. 13, 2018] With the early ratings success of freshman series Restored by the Fords and with sophomore series Home Town continuing to hold its #3 position in its Monday 9-10 p.m. timeslot among upscale viewers W25-54, top 10 cable net HGTV has executed mid-season pick-ups for both series. Restored by the Fords, which delivered a 26 percent ratings increase above the HGTV prime average among viewers P25-54 in January, stars sibling home renovators Leanne and Steve Ford, who enliven older Pittsburgh-area homes with beautiful and unique custom designs. It has been picked up for 14 episodes. Home Town, which stars Ben and Erin Napier who renovate homes in Laurel, Mississippi, has been picked up for 13 episodes.

With a healthy bank of current series such as Good Bones, My Lottery Dream Home, Flip or Flop Vegas and Flip or Flop Atlanta – all headlined by charismatic experts – HGTV is well-positioned for success in 2018. The network also continues to aggressively develop new talent and series, most recently commissioning the following five new series in the home renovation genre:

· In Hidden Potential (13 x 30), generic suburban homes get a shot of personality as builder and designer Jasmine Roth turns the builder-basic houses in Southern California into gorgeous dream homes that have personalized layouts and standout amenities.

· Best House on the Block (8 x 30) follows Lauren and David Liess as they run a renovation and design company outside of Washington, D.C.

“We’re keeping our focus squarely on developing the kind of content that attracts new viewers and encourages them to sample the programming on our networks,” said John Feld, senior vice president, programming, HGTV, DIY Network and Great American Country. “Even as consumers opt to view content on non-linear platforms, Restored by the Fords and Home Town are hitting the mark as HGTV’s newest ratings successes. The HGTV pipeline is solid as we move into the next quarter and beyond with dozens more new pilots and talent in development.”

What do you think? Have you seen either Restored by the Fords or Home Town? Are you glad they’ve been renewed?

I do not like either show. Home Town might be OK if they would stop trying to be funny – they are not the Gaines’. Do the reno and quit with the trying to be funny. The same goes for the Fords. I am sorry but they both look like they are spaced out on something and their attempt at humor is B A D.

I love watching HGTV. Some of my very favorite shows are on HGTV. I’m glad that “Restored by the Fords” is back on. I love Property Brothers, My Lottery Dream Home, Home Town, Flip or Flop Las Vegas, House Hunters, Nate and Jeramiah by Design, Trading Spaces, Hidden Potential, House Hunters Renovation, Love it or List it, While You Were Out, Flea Market Flip, Beach Hunters, Tiny House Hunters, Boise Boys and almost everything else that HGTV has to offer except House Hunters International. Thank you to whoever keeps us busy watching such wonderful shows.

LOVE Restored by the Fords. Theie designs are so fresh and clean. Was getting very weary of seeing the same old same old. The farmhouse look has peaked & is now cliche. Bring on the clean, white minimalism.

Not a fan of Restored by the Fords! Too much white everywhere!

Restored by the Fords and Home Town are my top two favourite shows on HGTV and is the only television I watch….. everything else on my tv is on demand. Well done network for keeping the good ones.

I love Restored by the Fords, and I LOVE Home Town.

Yay I love the show restored by the fords!!!

Absolutely love Restored by the Fords. They, and Fixer Upper are two of the BEST decorators in my opinion. Love that they are renewed! thakyouthankyouthankyou!!!!!