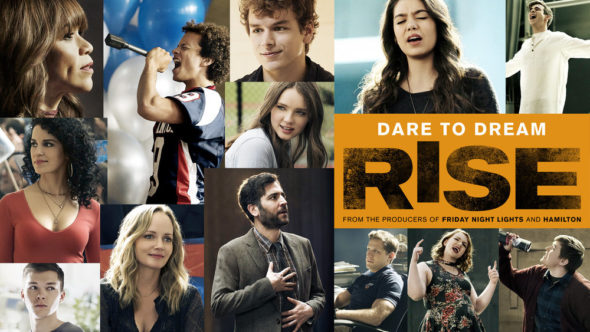 A high school drama, Rise stars Josh Radnor, Rosie Perez, Auli’i Cravalho, Damon J. Gillespie, Marley Shelton, Rarmian Newton, Ted Sutherland, Amy Forsyth, Casey W. Johnson, Taylor Richardson, Joe Tippett, and Shirley Rumierk. The NBC TV series centers on Lou Mazzuchelli (Radnor), who is the fictional analogue to Volpe. Although he is committed to his students at Stanton High School, Lou knows he needs to shake things up, in order to rekindle his passion for teaching. To that end, he petitions to direct the school’s theater program, but soon realizes he signed up for a whole lot more than he originally expected. Soon the faculty, student body, and even the town residents will find themselves caught up in the new spirit at the school.


What do you think? Do you like the Rise TV series? Should it be cancelled or renewed for a second season on NBC?

Keep this show! There is not a lot of shows out with such a diverse cast let alone with lead pocs in a play. The storylines are wonderful and each episode leaves you wanting more. People need to stop comparing it to glee! They are not doing musicial numbers. Follow the cast on social media , follow the official handles. High schoolers needs a realistic show and less reality series and talent competition shows. Let rise do just that…, RISE!

I absolutely love this show! Please give us a second season of Rise!

Our favorite show on tv. Hope it comes back!

I love this show so much! Please, please keep it on the air. It is even better than This Is Us. Give it a chance.

Please bring us a season 2!! Best show!!! I look forward every week!!! PLEASE

It’s a really fantastic show , sure hope it gets renewed!

Love this show, my daughter loves this show, she is currently in high school, please don’t cancel.

I really love the show Rise please keep it on and don’t cancel it!

I LOVE THIS SHOW!

I think this is my favorite show this year so far. The actors seem to be genuine in their roles. Bravo! Please renew season 2!

Found the first episode a little slow. But not unlike their last outing, Friday Night Lights, the writing and production value has become really good. A really good cast rounds it out. Now, the big question, are audiences going to think this is just another Glee, which it definitely is not. More of a This is Us.

It definitely seemed to start that way, but I take it all back.

I REALLY like this show… I look forward to it each week, it is a temporary fix for my: “This Is Us” craving. (Nothing will beat that show, but these characters are so REAL and it shows what high school is really like…). Don’t cancel this show too soon like you do EVERY OTHER SHOW… RISE DESERVES A CHANCE TO FLOURISH!!! SEASON 2 SHOULD BE A NO BRAINER!!