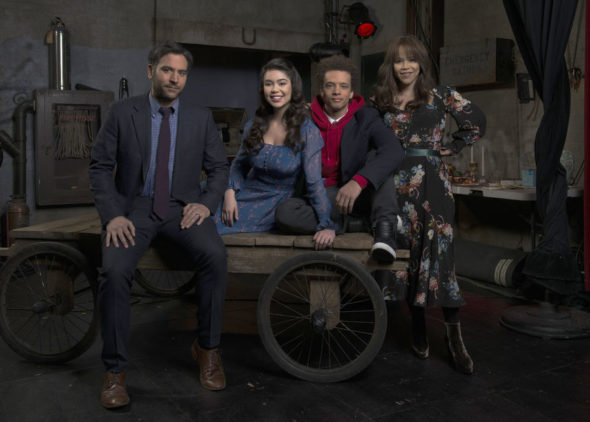 TV show description:
Based on the Michael Sokolove book, Drama High, the Rise TV show comes from creators Jason Katims and Jeffrey Seller. The drama centers on Lou Mazzuchelli (Radnor), who is the fictional analogue to the real teacher from the book, Lou Volpe.

Although he is committed to his students at Stanton High School, Lou knows he needs to shake things up, in order to rekindle his passion for teaching. To that end, he petitions to direct the school’s theater program, but soon realizes he has enlisted for a whole lot more than he originally expected.

By changing the musical to the provocative “Spring Awakening,” and casting performers other than the usual subjects, Lou stirs up controversy that doesn’t end at the auditorium doors. The ripple effect washes over not only the program’s assistant director Tracey Wolfe (Perez), and the kids, but also football coach Sam Strickland (Tippett).

As the changes take hold, soon the faculty, student body, and even the town residents will find themselves caught up in the new spirit at the school. The drama explores the idea of finding inspiration in unexpected places.

Series Finale:
Episode #10 — Opening Night
During opening night of “Spring Awakening” personal crises and dilemmas percolate in the wings backstage as Simon (Ted Sutherland) struggles to overcome his biggest fear, Lilette (Auli’i Cravalho) withholds a huge development from Robbie (Damon J. Gillespie), Robbie has a momentous breakthrough, and Tracey (Rosie Perez) draws a line in the sand. Over the course of one evening, decisions are made that will change Lou (Josh Radnor) and Stanton Drama forever. (Courtesy NBC.)
First aired: May 15, 2018.

What do you think? Do you like the Rise TV series? Should this TV show have been cancelled or renewed for a second season on NBC?

Absolutely love this show! The subject matter is very current and relevant, an awesome cast and writers, very thought provoking and entertaining. Rarely is there a show with so much diversity, not only in its characters, but in their story lines, something for everyone. We look so forward to seeing this show each week!

Story line is close to Glee show but much better actors. This
show touches my heart every episodes. Can’t wait to see next
weeks showings

Love it! Hope it continues.

The best new show ever. Realistic and current in the 21st century.

Josh Radnor is the perfect actor for his role on Rise. I find the show realistic and beautiful as it explores the complexities of surviving high school.

I like it. It’s a little slow moving but give it a chance to at least perform the play. Don’t cancel it.

Worst show ever! Josh Radnor should stick to comedy!!! Horrible over acting! Cancel this show!

Love this show. Love all the different plots!

I agree w/Diann–why are there articles about canceling the show?
Really liked the pilot. Engaging characters. Shows the power of theater to change lives!!

I liked it A LOT! Why are there articles about the show being cancelled? I thought I just watched the first epidode! I’m confused. Looking forward to seeing this show and finding out what hapoens with these characters.

I love this show! The message that it sends and a muscial too ..Win Win

I enjoyed this show. We could use more shows like this on television these days. It depicts a teacher who thinks out of the ‘usual’ way things have been done, and the students who support him in his choices. I think, given the chance, this will be a very popular show.

As baby boomers, my husband and I loved this show. There is alot of meaning in this show, not just singing, we loved this new show.