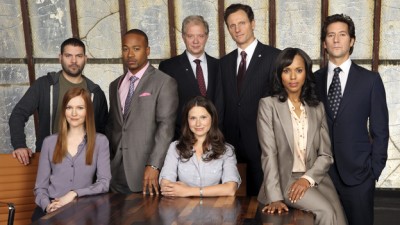 TV show description:
Olivia Pope (Kerry Washington) has dedicated her life to protecting and defending the public images of the nation’s elite. That means keeping their biggest secrets private. Both revered and feared at the same time, she’s a former communications director to the President of the United States.

She left the White House to open her own prominent crisis management firm. A mesmerizing top crisis manager, Olivia is hoping to start a new chapter in her life — both professionally and personally — but she can’t seem to completely cut ties with her past. Slowly, it becomes apparent that her dysfunctional staff, who specialize in fixing other people’s lives, can’t quite fix the ones closest at hand — their own.

Olivia’s accomplished staff will follow her anywhere and do whatever it takes to save someone’s reputation. Stephen Finch (Henry Ian Cusick) has dated his share of women but is trying to settle down and finally have a family. Harrison Wright (Columbus Short) is a smooth and slick litigator. Huck (Guillermo Diaz) is a hacker extraordinaire with a CIA history. Firm investigator Abby Whelan (Darby Stanchfield) has an enduring crush on Stephen. And Quinn Perkins (Katie Lowes) is the new young lawyer in the office who’s in awe of Olivia and is initiated in a trial by fire on her very first day on the job.

Olivia’s former boss, President Fitzgerald Grant (Tony Goldwyn), and his chief of staff Cyrus Beene (Jeff Perry) are never far from her beat. Olivia’s clients aren’t the only ones with secrets however and some of the biggest ones hit very close to home.

Series Finale:
Episode #124 — Over a Cliff
With the existence of B613 exposed to the world, Olivia and her Gladiators make the ultimate sacrifice in order to take down Cyrus and Jake — but how far will they go to get justice?
First aired: April 19, 2018.

What do you think? Do you like the Scandal TV show? Do you think it should have ended with season seven?

[…] its first season, Scandal drew mediocre ratings and was nearly cancelled. ABC likely brought it back because they need new […]

This show is awesome. I love the story line and the actors play there roles well. It’s always nice to see a show where a black woman is the authority figure. I hope they do continue this show as in just seven episodes I’ve become a fan.

someone please tell me why this show ended so quickly? is it cancelled?

Kerry is phenomenal is this show!!! I work at night but I DVR every episode!! I was disappointed to learn that Season 1 had ended so quickly. Can’t wait for Season 2 to begin!!!!

Kerry Washington is such a great actor!! and all the other actors are phenomenal as well!!! that Columbus Short know he is sexy lol lol! Please keep it on the air, its a great show! looking forward to whats next!

I just LOVE Scandal. It’s the best show on tv. I think Kerry Washington is great in it. I hope it doesn’t get canceled.

It is a keeper

Great show; the plots are twisting; love the diversity and the fact that it is not mentioned; like America!

I absolutely love this show. I stopped watching abc years ago but a friend told me to watch the third episode and I did. I have been hooked ever since. This show is a Keeper!!!

I disagree with your Darling. Kerry is great! I’ve been in this world and that’s exactly how the majority of women act. Even in todays times, it’s difficult for any women, especially a black women, to rise to her level of power. The show is raw and real. Also, she displays a heart while being strong in the face of adversity. Go Kerry!!!! You’re my hero. I know plenty of women like you and I’m proud to know them. It’s a once and a life time role. 🙂

i really like this series but i don’t like the scandal angle with the president of the United States. and the kidnapping of his mistress was too much for me reminded me too much of the conspiracy theories on marilyn monroe and the kennedy family. they need another angle. but the show is absolutely great. i hope it gets renewed again and again.

I beg to differ. This is a good series with a lot of potential stuff(?) to deal with. And her issues with the president could make for an interesting side plot.

Kerry Washington is lousy in this series. She supports an image of Black women as pariahs and in many ways her role resembles that of the Caption on Castle. Who wants to see aggressive, nasty Black women on TV? She will find, over time, that this role is lethal to her carreer. You betcha.

i have to disagree as well. Kerry’s character is aggressive because its her job. Also, there is a difference between being agrressive and in “in your face” which alot of the shows stereotype black woman as. Kerry’s character does not depict her in this manner at all. i applaud Shonda Rimes for creating this show that centers around a can do black woman, who gets results without being a stereotype.