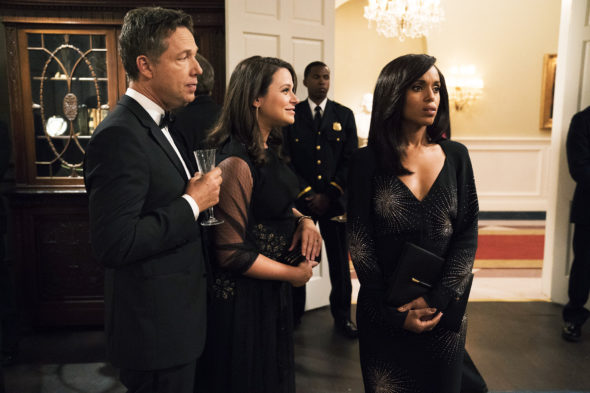 How does Olivia Pope handle her return to the White House, during seventh season of the Scandal TV show on ABC? As we know, the Nielsen ratings typically play a big role in determining whether a TV show like Scandal is cancelled or renewed for season eight. Unfortunately, most of us do not live in Nielsen households. Because of that, many viewers are frustrated their viewing habits and opinions weren’t considered, before the decision was made to end the series with Scandal, season seven. We care what you think, so we invite you to rate all the season seven episodes of Scandal for us here.

The seventh and final season of Scandal kicks off with Mellie Grant (Young) serving as the first female President of the United States, with Cyrus Beane (Perry) as her VP. Olivia is now both Mellie’s chief of staff and the head of the reinstated top secret government agency, B6-13, where she works closely with Jake Ballard (Foley). Quinn Perkins, who is pregnant, now heads up the crisis management firm, QPA (Quinn Perkins and Associates). Her team includes Abby Whelan (Stanchfield), Huck (Diaz), and Charlie (Newbern). Elsewhere, former President Grant (Goldwyn) is building his Presidential library, and David Rosen (Malina) remains on the job as Attorney General. Meanwhile, expect Rowan Pope (Morton) to still have some tricks up his sleeve.

What do you think? Which seventh season episodes of the Scandal TV series do you rate as magnficent, scandalous, or merely respectable? Is it ending at the right time? Would you have watched and eighth season of Scandal? Don’t forget to vote, and share your thoughts, below.

Bring scandal back with season 8 and more love this show

This show has had me from day one. Smiling, crying, laughing, to yelling at my tv screen! This is what tv shows are and should be about, all while being human. So sad to hear the show will be no more but it was definitely good while it lasted and will be a hard one to replace. (Tilting my white hat )*

This is a prime example of good shows overstaying their welcome. This season is sad. Obviously the writers are simply not interested. Scenarios are so unbelievable. Last nights episode was insulting to the viewer.

Scandal had me beginning with season 1. But Chanda let Oliva turn dark by turning into the monster her father is. I was beginning to think I was glad it was ending, but S7E8 gave me renewed faith she might be redeemed. She MUST wear the white hat. She was everyone else’s savior. She can’t be the monster/COMMAND! I will be SOOOOO….. disappointed if she doesn’t come back to the white hat.