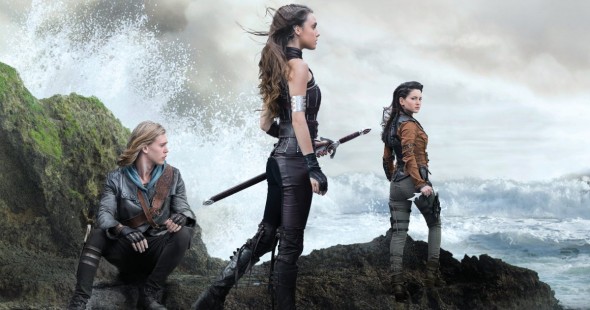 The first season of The Shannara Chronicles is ending next week, and showrunners Al Gough and Miles Millar already have season two in mind. The two recently spoke with Collider about the series’ upcoming season one finale and their plans for season two of the MTV TV show.

The Shannara Chronicles stars Austin Butler, Poppy Drayton, and Ivana Baquero as three unlikely heroes on a quest to defeat a demonic army.

Speaking to Collider, Gough said the season one finale will have a sense of closure, but it will also leave room for another season:

Hopefully, it will be both. There’s certainly a sense of closure, but you see the doors open for subsequent seasons.”

We liked the idea that it was a contained season, following the story of theElfstones, and it has an amazing ending that’s a really bold way to end the season. But, it also opens it up for future seasons. We leave a lot of people in jeopardy.”

The season one finale of The Shannara Chronicles airs next Tuesday, March 1st, at 10 p.m. ET/PT.

What do you think? Have you been watching the first season of The Shannara Chronicles? Do you want a second season?

Best show ever ! I like the actors, story just everything! I would really like to see more 🙂

Yesssss this show is there beesst

Yes!!! This is a very good series along with Shadowhunters on the Freeform channel.

Would love to see more

Would love another season or two!

Yes!!! I absolutely love the Shannara Chronicles and hope for a second season!!!

Yes. I looked forward to Tuesday nights and escaping from reality for an hour. I can’t wait till next season. When does it start?

Hope MTV doesn’t pull another “Skins” (early termination) on this one. It’s pretty much as good a show…

I’m hoping for many follow-up seasons as I enjoyed Season 1 immensely!!

There are very few shows I watch but I must say this one is my absolute favorite and was furious to find out I had to wait to see what happened. There should be many more seasons to come and hopefully very soon!!!

Yes do a 2nd season. It’s a great show. I think that the show will have a lot of fans all over the world and maybe become more popular than TVD…And MTV has done a great job with the filming-it has great potential. So go for it! It’s new, it’s great and people like it! 😉