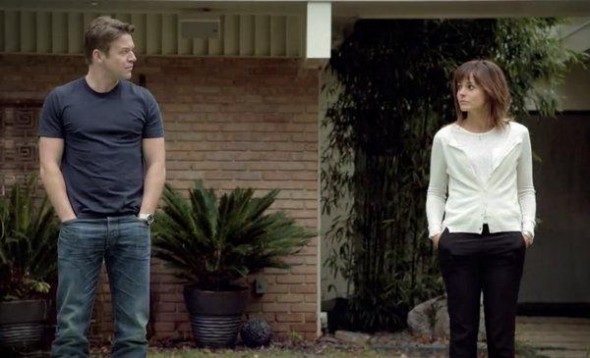 TV show description:
This drama TV show explores modern marriage at its midpoint through the lens of one husband and wife — Neil (Matt Passmore) and Grace Truman (Stephanie Szostak).

Neil has a successful career, a loving family, a beautiful house, a big-screen television, and more. So why does he feel like something is still missing? The truth is that 18 years of marriage and countless 80 hour weeks have left Neil feeling disconnected from everything and everyone he loves.

After a big outburst on a plane leads him to quit his job, Neil stumbles across his wife Grace in the throes of passion with another man. Furious, Neil confronts his wife’s lover, Simon, only to learn the more shocking truth — their meeting was a professional arrangement. Grace is seeing a male escort.

The news hits Neil like punch to the gut, but when he inadvertently winds up with Simon’s phone, he makes the decision try out the escort business for himself in the hope that the experience might offer some new insight. As it turns out, Neil’s good looks, skill closing deals, and apparent sexual prowess make him a natural.

He soon finds himself a hot property — both with a local madam (who is intrigued by this new stud on the scene) and his old boss (who is impressed by Neil’s newfound swagger).

But just because Neil’s life is getting a shot in the arm doesn’t mean that his old problems have disappeared. As if the hole in his marriage and his daughter’s teenage growing pains aren’t enough, he also has to deal with Simon, who isn’t too pleased to have his business stolen out from under him, and isn’t afraid to make things a lot more difficult for Neil.

Grace had big aspirations as a young woman but passed up a Fulbright scholarship and a career in the arts to raise a family with Neil. She deeply loves Neil and their daughter Anika but as her old dreams have receded further and further into the past, she’s begun to feel as empty and unfulfilled as the open houses she now decorates part time.

So when a night chasing excitement leads to an encounter with Simon, a male escort, Grace begins to take advantage of his services. Even if it doesn’t fill the void in her life, it’s something new and exciting. But while the arrangement begins as a professional one, like any relationship it evolves over time. And now that Neil knows Grace’s secret, things are about to become a lot more complicated.

Sexy and suave, sensitive and sophisticated, Simon (Blair Redford) has something that women just respond to which is probably why many of them, pay handsomely for the pleasure of his company. Simon has really started to make a name for himself in the field, so he’s not too happy when Neil steals that name, along with his client list.

Series Finale:
Episode #20 — … Through New Beginnings
The deal with Barry, the former Bastion client, to invest in Neil and Grace’s new escort service is looking promising until Adriana sours him on it so she can put herself forward as their investor instead. But Neil and Grace do not want to get into bed, so to speak, with Adriana. Neil then approaches Kate, the blogger who wrote the exposé on him, about her introducing them to an angel investor whom she knows in exchange for their cooperation on being the subjects of a book she wants to write. But when Neil sees that there are too many strings attached, he backs away. Now that Simon is the CEO of Waverly Industries, could he be the partner they’ve been looking for?

After testing out several potential sperm donors and finding none of them to her liking, Adriana realizes that she’s been looking in all the wrong places for the right man. At the casino night party, Adriana tricks Neil into going up to her suite under the pretense of looking for Grace. Now that she’s decided what, or rather whom, she wants, she’s not going to let anything to stand in her way. (Courtesy USA)
First aired: December 18, 2015.

What do you think? Do you like the Satisfaction TV show? Do you think it should have been cancelled or renewed for a third season?

Bring the Show back

Bring it back, please!!!

Please renew Satisfaaction it was a great show

They never want to make films about men being prostitutes, only women! This was a good show. It must have been canceled by men because I think the women loved it.

It is a great show please bring back satisfaction

Please renew SATISFACTION it was such a great show

Why was Satisfaction cancelled when the show had excellent ratings

I too would like to know why it was cancelled when the ratings where so high!