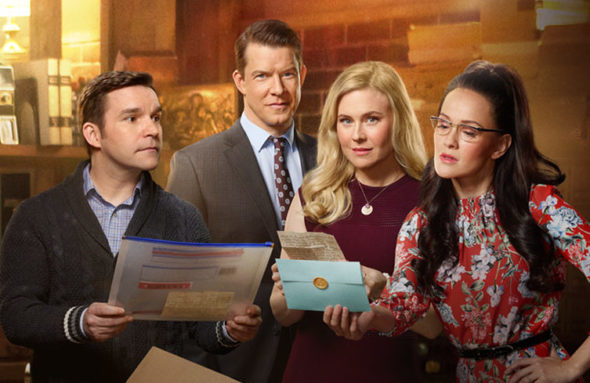 In Summer 2019, it was announced that Hallmark had ordered a new Signed, Sealed, Delivered movie to be released in 2020. The year is nearly over and that hasn’t happened. Has the movie been cancelled or just delayed? Here’s a timeline.

The Signed, Sealed, Delivered story began in October 2013 as a backdoor pilot movie on Hallmark and did well enough to get the go-ahead for a weekly TV series. That lasted for 10 episodes, airing from April until June in 2014.  Rather than renew it for a second season, Hallmark opted to move Signed, Sealed, Delivered to sister channel Hallmark Movies & Mysteries and has kept it going as a series of movies. To date, there have been 10 movies with the most recent airing in July 2018.

Hallmark announced plans for an 11th movie to be released sometime in 2020 on the new Hallmark Drama channel. Plot details weren’t revealed but, in September, Williamson shared that she’d just sent the script to Hallmark.

In early March 2020, Mabius noted that “It’s been far too long since we got the band together. We’ve been looking forward to this one for awhile now.” He teased that “Um. Don’t mean to speak too soon… A little bird may have indicated that we’ll be in production on a new #SSD by June-July at the latest. But don’t quote me, until we’re rolling cameras.” The series is shot in Vancouver and utilizes both American and Canadian talent.

Unfortunately, the COVID-19 pandemic caused television production across the globe to be shut down. In May, Booth offered, “We #POstables are itching to get back to shooting the next movie which will premiere later this year on @HallmarkDrama. As soon as it is safe to do so, we will be shooting! Until then we all have to #trustthetiming #SSD”. Mabius said, “Just have to get this virus to cooperate and then get some more movies ordered…keep telling @hallmarkchannel that you would like more. They’ll eventually listen.”

In June, responding to a fan who said that the existing movies were helping her through “bleak days of anxiety”, Mabius wrote, “Well, that’s quite a compliment. Providing comfort and distraction, at any time, is certainly high praise. We are ready to get to work on more installments of escapism as soon as it’s safe to do so..! X”

In a summer interview, Mabius told the Hallmarkies Podcast, “I’m so excited to read the next script. I’m just dying to. Martha is very excited about what she’s come up with. I think she’s holding back on showing us the script until we’re closer to shooting.” He continued, “I spoke to the producers a couple of weeks ago and it looks like [filming in] late-October, is my guess. They have really strict protocols in place for opening back up production in Canada. Kevin Fair, who directs most of our movies, is a dear friend of mine and he’s directing another Hallmark movie right now. They’ve been forced to cast a lot of these Hallmark movies with exclusively Canadian actors because then they don’t have to go through the process. [Bringing American actors into Canada] involves strict two-week quarantine for the first two weeks you’re there and then, you’re not allowed, other than going to work, to leave your house the entire shoot. If you do, you can get fined like $1,000,000. … and they do check up on you, from what I understand.”

By September, composer James Jandrisch and Booth were itching to get back to work.

In October, the cast and crew still hadn’t returned to work and some viewers had become increasingly concerned that the movie plans had been cancelled. In a tweet, Mabius made it clear that the delay was only due to the ongoing pandemic and safety concerns.

And that’s all there is to say about that. No other insidious reasoning. All of the other speculation and rumor is simply, just that. https://t.co/MZ1WsVfTl3

Yesterday, Booth sent a message to the show’s fans and indicated that a new movie is still coming.

So, while the cast and crew have clearly wanted to make a new movie, it just hasn’t been possible due to COVID-19. A new movie won’t air before the end of 2020 but, unless we hear differently, a new adventure for the POstables is still in the works and will be filmed as soon as it can be done safely for all involved.

What do you think? Do you enjoy the Signed, Sealed, Delivered adventures on the Hallmark channels? Are you going to watch the newest POstables movie whenever it airs?

Love the show!! Wish it was a series!!

My husband & I love, love, love all the SSD movies!! Can’t get enough & can’t wait until the wonderful cast shoots more!! Thank you all❣️

This are fun, positive and moving shows with a fantastic message. The characters are quirky and always grow. This is the time we need them more than ever. Please make the new movie soon!!!!

I just am in love with the show, I wish there were more episodes And seasons. This show feeds my soul and has helped me through a very dark time of losing my husband. I watch it over and over again. Anyway, thank you for creating it and please continue it as long as you can. Sincerely, Donna

I love these movies. They are very well made and always have a positive message. Please keep them coming.

I love SSD movies. My husband and I watch them regularly. Please keep them coming. They are really entertaining. The cast is so quirky snd perfect. So enjoyable to watch.

I love all the postable movies, please keep them coming

I know all of the SSD shows by heart, I have watched them soooo many times. I check the search box regularly to see if and when the next one is coming. Please hurry!!!

Yes, please more #SSD movies or bring back the series. Love them!

Signed, Sealed, Delivered – a weekly show that should still be on the air today especially given the current status of things going on in the world. If actors, writer(s) and Hallmark are willing, the show should return! Hallmark has many shows loved by its viewership like this and “When Calls the Heart”. My opinion though. I love all the stories presented, especially the two forementioned!

Yes I am waiting anxiously for SSD to return. I have watched the reruns 3 times now.

Signed, Sealed, Delivered is one of the best shows I’ve ever seen, and I’m 71. My husband, our daughter, son in law and myself can all enjoy these movies together.

Please, please, please get moving to the new #SSD Hallmark Movie. It has been a joy to watch. I have seen the series and all of the movies and am ready for more. I understand the Covid situation and want everyone to be safe but fans still need a lift and there is nothing like watching a really holism group of people, lots of love to be shared and a great storyline.