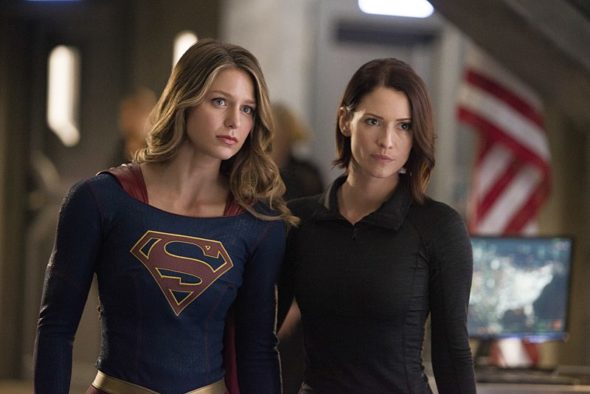 Though the girl of steel can fly high, The CW wants her to stay put — on the network. The CW has renewed the Supergirl TV show for a third season. Season three will air as part of the 2017-18 season and will likely start airing in the fall.

Supergirl revolves around Superman’s cousin, Kara Zor-El (Melissa Benoist). As a girl, she survived Krypton’s destruction by being sent to Earth where she was raised as a human. She kept her powers a secret and now, as an adult, works as an assistant at a big city media conglomerate. Kara’s existence becomes known to the world and she is enlisted by a super-secret agency to help protect the citizens from evil forces as Supergirl. The rest of the cast includes Mehcad Brooks, Chyler Leigh, Jeremy Jordan, David Harewood, Floriana Lima, and Chris Wood. Recurring actors this season include Calista Flockhart, Ian Gomez, Katie McGrath, Lynda Carter, Brenda Strong, and Tyler Hoechlin.

As expected, season two of Supergirl is way down in the ratings when compared to the first season which aired on CBS, a much bigger network. It’s currently averaging a 0.87 rating in the 18-49 demographic with 2.69 million viewers. Those numbers aren’t good enough for the Tiffany Network but they are good enough to make Supergirl the second-highest rated show on The CW. A third season renewal is no surprise.

The next original episode of season two airs on January 23rd.

What do you think? Do you like the Supergirl TV show? Are you glad that it’s been renewed for a third season or, should it have been cancelled instead?

Supergirl is a really good show! I know people don’t like the side propaganda, but it’s actually nothing new. Honestly we as a society are growing to accept things we use to consider wrong (racism, interracial relationship, LGBT, etc). Despite the good “programing” people resist and ridicule the show for it. People will always have opinions. Too bad those opinions carry weight over the continuation of a show. Thank god for netflix, when CW drops flash, LoT, Arrow, or Supergirl I know DC will sigh a contract with netflix. Honestly I only watch these shows on Netflix anyway. TV is… Read more »

The first season of Supergirl was an absolute delight to watch, especially with the family. Melissa Benoist’s portrayal of sweet innocence and charm provided the viewer a creative look at vulnerability contrasted against the impenetrable nature of her character. Loved it. Then came season two. It got really uncomfortable. The character development between Chyler Leigh and Floriana Lima was senseless. To your point Jay, it’s not about homophobia or growing up to accept fringe life styles. It’s about choices, and Hollywood along with others like yourself are going down a road that’s too difficult for many of us to travel.

Personally, I like a good Lesbian kiss now and then.

I love the show and the actors, this is the only show I let my kid watch.

Until he is a little bigger to watch.

I enjoy the show Very much! Love it as a matter of fact. I find it to be one which I can enjoy without all the unnecessary violence and overly done sexuality. Of course there is Fighting, but not over done. There is a sexual content, but with taste. It is, actually, a nicely balanced production. Being a fan of Superman since the early sixties I found this to be a refreshing additive. There is actually many plots that could be used to further the future of the show.

In the negative year to year and it’s renewed? Optimistic much?

It only gets renewed because it pushes leftist agendas.

Just love this show. We need more like this one where families can enjoy watching TV together. Bring on the 3rd season!

The worst show ever to air on television. The concept was good, but the politics are so blatant as to make the show unwatchable. It’s a dystopia where strong, powerful men beg favors from stronger, more powerful women. Kind of like the Handmaid’s Tale in reverse. And none of this was necessary – the character was fine without the SJW garbage.

We are changing, as a people. Almost 80 years ago (less than a life time) racist and anti homosexuality “programming” was every where. Now we have a chance to correct our past through entertainment. I’m sure people were pissed when Jobs started forcing corrective training agaist racism, sexual advances, etc.. Now when they say 0 tolerance for sexual harrasment, favoritism, racist comets or activity no one bats an eye. Well guess what it’s time again, but now it’s for LGBT. In 5 yeas it will be normal. Conform or isolate from progress your choice. Warning: last group to isolate from… Read more »

No, you leftists are trying to force change on society by destroying it. The rest of us want no part of your sick version of “progress”….

Enjoyed the show from 1st season, however the hidden political messages such as persist and resist are too obvious as being anti trump etc. the show lost the loyal viewer. If I want politically driven content, I can watch CNN or fox. I don’t need it in entertainment too.

The messages aren’t even hidden. In the last episode a character said, “Tell me he’s still a Democrat”. They even had Lynda Carter speaking in Hillary Clinton’s cadences, for Heaven’s sake! (The worst part of the network version was making the Wintour character (Cat Grant) into a hero. I suppose in Hollywood such mistreatment of employees is normal. In the real world, she would have been removed because of employee lawsuits, even in an “at will” state.)

Truly grateful to see that ” Super Girl” is being renewed for a third season. I’m probably way out of range , as far as the demographics are concerned , being in my mid 60s( And huge fan of DC Comics in the late 50s early 60s), but I thoroughly enjoy the concept. It did get somewhat out of hand at times with the aliens and stuff(esp the earlier episode with Mon El in the copying machine room), but the concept is still incredible and the last few episodes are really kind of turning around and getting more down to… Read more »

An Ultra Liberal Agenda show by Hollywood. CBS had a much truer version & more fun family friendly show, when it went to CW, episodes were about Alien registration, deportation, a Woman President in a Pants Suit, gun control, lesbian scenes with supergirl’s sister & on and on. The good news is a writers strike could be kryptonite to this series & end it. These comments on their FaceBook page were deleted by the hundreds by the show.

Really?….. I think you are reading a little to deeply into this….. people are crazy these days and I actually feel crazy for taking the time to respond…. lol….. however…. if anything, yes it is a progressive show that I do watch with my family… my 11 and 9 year olds live it and so do I….. it’s actually one of a few shows that we do watch together and I don’t mind them watching at all……really since the electioneveryone thinks everything has a hidden agenda and it drives me crazy

C’mon – Lynda Carter speaking in Hillary’s cadences? The character was perfect without the politics. Name me a non-progressive show, anywhere – this one is a little more blatant than usual.

Continue 3rd season and beyond.